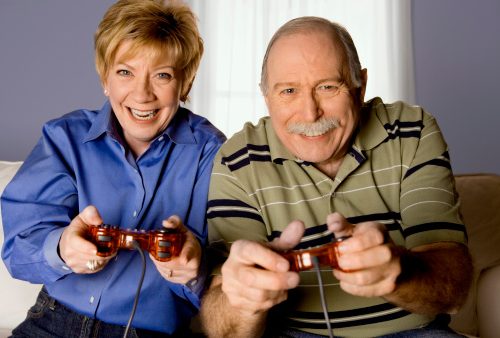 Cognitive problems in older adults brought on by depression may be improved by playing video games. Researcher Patricia Areán explained, “We found that moderately depressed people do better with apps like this because they address or treat correlates of depression.”

The study enrolled older adults diagnosed with late-life depression into a treatment trial where they received either a mobile, tablet-based treatment technology developed by Akili Interactive Labs called Project: EVO – or an in-person therapy known as problem-solving therapy (PST).

Lead author Joaquin A. Anguera added, “While EVO was not directly designed to treat depressive symptoms, we hypothesized that there may indeed be beneficial effects on these symptoms by improving cognitive issues with targeted treatment and, so far, the results are promising.”

Older adults with depression are known to have attention and focus problems because they are too distracted by their worries, so this technology was developed to prevent such distraction.

In a second study, 600 people with moderate or mild depression were randomized to receive one of the three interventions: Akili’s Project: EVO, iPST (an app deployment of problem-solving therapy), or a placebo control (an app called Health Tips offering healthy recommendations).

Although the technology was found to improve depression, the researchers recommend that these interventions be administered under human supervision, because patients lacked motivation to use the technology on their own.

Researchers are now studying the effects of Project: EVO in other conditions, such as Alzheimer’s disease and ADHD.

Studies have shown that adults who play video games tend to be happier and more relaxed than those who do not. Aside from boosting your happiness reasons, here are 10 additional benefits from playing video games: