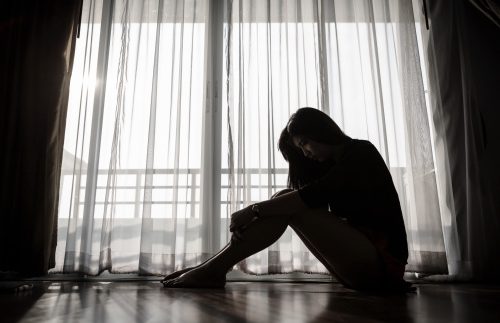 Depression and anxiety are common features in fibromyalgia patients. A recent online survey involving those who suffer from the chronic condition showed that almost two-thirds of people diagnosed with fibromyalgia have also been diagnosed with depression.

The survey, conducted by the chronic support community NewLifeOutlook, included 671 people living with fibromyalgia. Fibromyalgia is best described as widespread chronic pain, which is usually a deep aching, throbbing, shooting, stabbing, or intense burning. In many cases, the pain and stiffness are worse in the morning and when muscle groups are used repetitively.

In the NewLifeOutLook survey, over 63 percent of the respondents indicated that they had been diagnosed with depression and 58 percent admitted that they had been diagnosed with anxiety. These numbers are much higher than what we see in the general population. The National Institute of Mental Health sets the number of Americans with an anxiety disorder at 18 percent and major depression at 6.6 percent.

Most physicians will tell you that it is a vicious cycle – fibromyalgia makes depression and anxiety worse, and depression and anxiety can exacerbate fibromyalgia symptoms. If you have fibromyalgia, it can be easy to get depressed because you are not the person you once were. For instance, you may not be able to do the same activities you once enjoyed, or you may not have the endurance and stamina that you once had. Survey respondents also pointed out that it is hard to deal with the illness emotionally when those around you don’t understand what you are going through.

There was a time when fibromyalgia was not taken seriously and thought to be all psychological. Even though the medical community has determined it is a real condition, some people still have doubts, adding more stress to those who suffer from it. This could be one of the reasons it is not unusual for people to have fibromyalgia and anxiety attacks.

Anxiety and depression in people with fibromyalgia

It is important to recognize the link between fibromyalgia, anxiety, and depression. Getting proper diagnosis and treatment as soon as possible can help improve a person’s wellbeing both physically and mentally.

In the survey, almost 30 percent said they had symptoms for as long as five years before receiving a diagnosis. About 40 percent received a diagnosis between one and three years from the onset.

The extreme pain and other symptoms, such as fatigue, that are associated with fibromyalgia can be debilitating. Though it makes sense that this would depress people, some are reluctant to make an association with depression out of fear that people will perceive fibromyalgia as a mental health problem.

What is odd is that depression and anxiety have also been associated with rheumatoid arthritis, osteoarthritis, and ankylosing spondylitis, yet no one seems to raise an eyebrow when it is mentioned. The worst part is, fibromyalgia appears to come with a higher risk of depression and anxiety than these other illnesses, yet people are hesitant to discuss the issue.

The American College of Rheumatology indicates that fibromyalgia is widespread pain persisting for at least three months with the presence of sensitivity in 11 out of 18 points – called tender points – that are painful to finger pressure.

One study, conducted in Brazil, showed that the presence of depression and anxiety in fibromyalgia patients is related to a larger number of physical symptoms and stronger pain intensity.


Effects of anxiety and major depression on fibromyalgia

Fibromyalgia and depression disability can have a huge impact on a person’s life. It can lead to inactivity and social isolation. Studies show that depression does not increase the severity of fibromyalgia, but it can cause behavioral changes that could impact the illness. The most recent studies on fibromyalgia, depression, and anxiety seem to suggest that those suffering from the chronic condition and who are not depressed tend to be more active. In many cases, activity can bring some relief from fibromyalgia symptoms. Physical activity is also known as a mechanism to help prevent depression.

It is important that fibromyalgia sufferers describe any signs of depression or anxiety in detail to a healthcare professional to help determine the cause. Do keep in mind that just because a person is diagnosed with fibromyalgia, it doesn’t automatically mean that this is the cause of their depression – there could be other issues at play.

Doctors continue to examine the links between fibromyalgia and anxiety. They don’t exactly know why, but anxiety-causing fibromyalgia may exist due to a neurotransmitter response that increases nerve firing or inflammation of certain parts of the body. It is also possible that anxiety damages something in the body, leading to fibromyalgia.

Here is another theory: It may be that some people are more prone to some form of mild fibromyalgia, and anxiety simply makes it more pronounced. The anxiety could be causing a “hypersensitivity”, a sensation in which the mind and body is more in tune with pain.

Fibromyalgia and depression treatments vary, but can include medications to help manage the pain, as well as exercise to help with pain, fatigue, and anxiety. Lifestyle changes, such as reducing alcohol consumption, getting more sleep, and increasing vitamins and minerals, are helpful, too. Many people who suffer from fibromyalgia also report that they have benefited from meditation.

In fibromyalgia patients, going gluten-free may be a potential dietary intervention: Study

Fibromyalgia vs. polymyalgia: Differences in symptoms, causes, and treatment