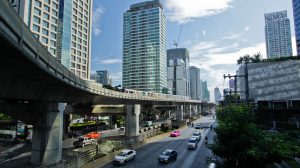 Study author Hong Chen explained, “[However] our study suggests that busy roads could be a source of environmental stressors that could give rise to the onset of dementia.”

Chair of neurology at North Shore University Hospital, Dr. Paul Wright added, “This large study brings to light a major health concern that needs to be considered. With dementia rates on the rise and a significant public health concern, society needs to be aware of the ramifications of this study. Urban planners and policymakers need to also consider the impact of urban development on the health of its population.”

The researchers followed 6.6 million Ontarians between 2001 and 2012, using postal codes to determine proximity to a major street.

Medical records of the participants were also examined to identify dementia, Parkinson’s disease, or multiple sclerosis.

Ninety-five percent of participants lived less than a mile from a major roadway, with half of them living within 650 feet of a busy street.

Only dementia risk was found to get higher the closer someone lived to a major street. Multiple sclerosis risk and Parkinson’s disease risk were not affected by living proximity to a busy roadway.

The researchers found that participants living within 164 feet of a busy street were at the highest risk for dementia. Living further than 650 feet from a roadway was not associated with an increase in one’s risk of dementia.
Although it is well known that pollutants increase the risk of dementia, researchers speculate this is only part of the problem. Chen explained, “With widespread exposure to traffic and growing rates of dementia, even a modest effect from near-road exposure could pose a large public health burden. More research to understand this link is needed.”

Researchers suggest that preventative measures be put into place sooner rather than later. Urban developers should be mindful of these findings when planning living spaces.