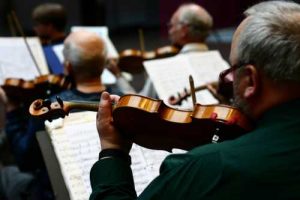 Music positively affects cognitive function, mood, and relationships among dementia patients. The researchers found that patients who take part in a music program experience positive effects in these aspects of life.

The researchers spent nine months studying a music program known as B Sharp, which is geared towards those with dementia and Alzheimer’s disease. The researchers found that the majority of participants experienced unexpected reversal of cognitive decline during the program.

Lead researcher Jeni Cross explained, “That’s stunning for people who have a degenerative disease. The best we had hoped for was to keep cognitive function flat. It actually improved for most of them.”

Other benefits of the B Sharp program included improvement in alertness, engagement, mood, sense of community, feelings of acceptance, and improvement in the patients’ interaction with their caregivers and loved ones.
A participant of the program said, “We did a lot of hand-holding and smiling during and after the performance. We made eye contact throughout the entire performance, and it was like soul-traveling.”

Caregivers, who are often left to their own devices and experience loneliness and isolation, also greatly benefited from the program. The experience provided them with a sense of normalcy and be able to connect once again. Cross explained, “That was the most surprising finding. We knew caregivers were stressed out by the caregiving, but we didn’t realize that they were losing reciprocity and mutuality. They need to feel like they are giving and receiving.”

Positive effects were seen days prior to each performance as the patients were anticipating the next show. Even those patients with severe forms of dementia still demonstrated excitement and improved mood as they remembered the last performance.

Some participants explained that the performances prompted them to want to explore music at home and engage in related activities.

Cross suggests further research is required in order to fully understand the benefits of music in dementia and Alzheimer’s disease. Cross concluded, “We can say that participation showed positive effects and it’s worth continued study. It’s been really rewarding to see the results.”