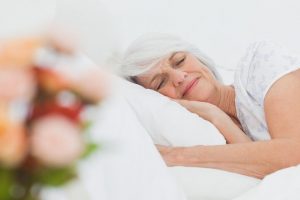 A new study has found that people who report sleepiness are more likely to demonstrate markers which could lead to Alzheimer’s later on. Specifically, these people showed a build up of beta-amyloid brain deposits.

Beta-amyloid is a protein that is an early indicator of Alzheimer’s later in life. Previous studies have found that poor sleep quality may be a risk factor for dementia, warning readers to ensure they are getting a healthy amount of sleep each night. Daytime sleepiness is one potential side effect of poor sleep quality or insufficient sleep time.

“Factors like diet, exercise, and cognitive activity have been widely recognized as important potential targets for Alzheimer’s disease prevention, but sleep hasn’t quite risen to that status—although that may well be changing,” says lead study author, Adam P. Spira. “If disturbed sleep contributes to Alzheimer’s disease, we may be able to treat patients with sleep issues to avoid these negative outcomes.”

The researchers analyzed data collected by the Baltimore Longitudinal Study of Aging, which began in 1958. During a certain portion of the study, a questionnaire was answered by participants, which asked a question about the individuals’ likelihood of daytime sleepiness as well as a question about napping habits. At a later time, a subgroup of researchers began performing neuroimaging in 1994. They later identified 123 participants who had both answered the questionnaire and had undergone neuroimaging.

It is unclear how these two factors are correlated. It is possible that the daytime sleepiness is what causes the proteins to build up, but it is equally possible that it is the buildup of the amyloid plaques that cause the sleepiness to occur. The presence of the amyloids is itself the most concerning, as they are connected with later development of Alzheimer’s disease.

“There is no cure yet for Alzheimer’s disease, so we have to do our best to prevent it. Even if a cure is developed, prevention strategies should be emphasized,” Spira says. “Prioritizing sleep may be one way to help prevent or perhaps slow this condition.” The researcher goes on to suggest that practicing healthy sleep habits is one way to decrease the risk of the condition, including not watching television or using electronics in bed.