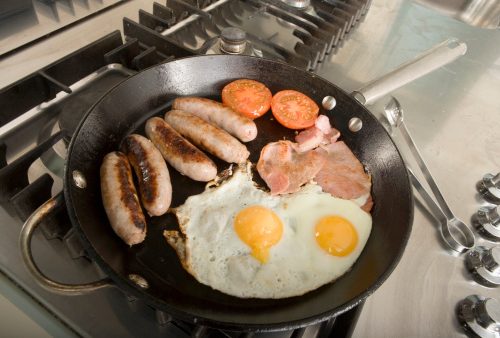 Experiencing a blood clot can be devastating, as it is one of the more common reasons for stroke and heart attacks to occur. According to a new study, the foods we eat contain a compound that causes bacteria in the intestinal tract to increase a person’s risk for blood clotting.

A nutrient commonly found in concentrated meat products such as beef, chicken, and eggs was found in a small study to promote gut bacteria’s production of choline. The researchers discovered this when giving 18 healthy volunteer choline supplements—they found that it increased their production of a chemical called trimethylamine N-oxide (TMAO), which in turn increased the clotting tendency of their blood. But the researchers say that the use of aspirin might reduce this observed risk.

TMAO is produced by gut bacteria that digest choline and other substances, according to the researchers, with past studies on the substance linking high levels of TMAO to the increased risk of clot formation, subsequently increasing the risk of heart attacks and strokes. The exact mechanism for this clotting phenomenon is the blood platelets becoming extra sticky, leading them to clump together. This study provides the first direct evidence of this effect occurring due to high TMAO levels in the body.
The study in question observed 18 healthy adults, of which 10 were meat eaters and eight were vegetarians or vegans who took 450mg choline supplements daily for two months. This is approximately the same amount of choline found in two to three eggs. After one month, the researchers found that TMAO levels in the subjects were increased 10 times on average when compared to levels at the start of the study and that their platelets had an increased tendency to clump together.

“This study gives us one of the mechanisms by which TMAO may contribute to cardiovascular disease,” said Dr. J. David Spence, who directs the Stroke Prevention & Atherosclerosis Research Centre at Western University in London.

The researchers stress that becoming a vegetarian is not necessary, but incorporating more vegetables into the diet in substitution of meat will help balance these substances in the body. Increases in TMAO may be more worrisome in those with increased risk for heart disease and stroke. Dr. Stanley Hazen, the senior researcher of the new study, goes on to suggest that components of a Mediterranean diet, such as olive oil, may help inhibit TMAO formation, and mentions that low dose aspirin was shown to counter the effect of TMAO in a separate study.