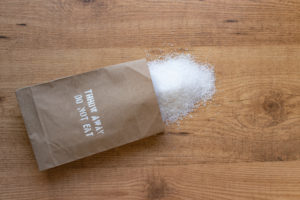 Health experts have been urging people to eat less salt for decades. Sodium, a compound in salt, is associated with high blood pressure and increased risk for heart disease.

But how are you supposed to do it? Sodium is nearly everything, and even a healthy diet will still feature at least some. Getting less than 1,000 milligrams (mg) per day, even with a very heart-healthy diet, is practically impossible.

Thankfully, sodium isn’t all bad. It’s a valuable electrolyte required for several important bodily functions including muscle and nerve function, as well as water balance around your cells.

The problem is than most people eat way too much of it. Estimates suggest that on average, people consume about 3,200 mg of it per day.

That’s 30% more than the government recommendation of 2,300 mg, and nearly double the 1,500 mg per day that the American Heart Association recommends.

Let’s say you keep things pretty healthy. But there is no way you’re completely avoiding sodium. It’s what makes processed food so dangerous—just a minor daily indulgence can send sodium levels over the edge.

For example, oatmeal, plain Greek yogurt, hard-boiled eggs, spinach, hummus, and more all have small amounts of sodium. A low-sodium diet is still likely to have you in the 1,200 mg range each day.

To cut back on additional sodium, you’ll want to try to limit the intake of certain foods. Convenient items like pizza, processed meat (like deli meat), prepared meals, frozen meals, restaurant food, and snacks are all loaded with sodium.

But it doesn’t stop there. It’s even lurking in popular items around your house you may not expect. Condiments like ketchup, mustard, mayonnaise, and BBQ sauce are culprits. Salad dressings, seasonings, tomato sauce, and more pack salt too.

So, always read nutrition labels. Covering your salad in dressing, for example, can sneak a lot of salt into your diet.

Other ways to cut back include rinsing canned beans and vegetables, and not adding much salt when cooking rice, pasta, and other grains.

To boost flavor to food, consider seasonings like fresh herbs and spices or citrus juice. Low/no sodium packaged options are available, but for the most part, avoiding packaged products is recommended to keep sodium intake minimal.

Don’t be scared of sodium, but be wary of how much you’re eating. A healthy diet with a few sprinkles on your plate will keep you in the safe zone and you likely have little to worry about.

If you currently have a high-sodium diet, start making slight reductions each day so it’s not too much of a shock to your taste buds. Keep your efforts up and you can reduce blood pressure and the risk of heart disease.