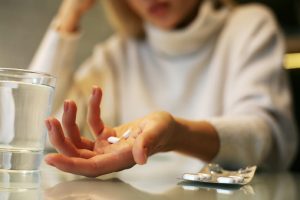 Chances are that you’ve taken medication to treat a headache or muscle pain at one point or another, which can be purchased at your local pharmacy. They may take the form of Aleve or Motrin, but they all advertise as doing the same thing: relieving pain. However, you may be exposing yourself to an increased risk of heart attack, as a new study into these over-the-counter drugs found that using them can increase your risk after just one week of use.

These types of pain medications are known as non-steroidal anti-inflammatory medications (NSAIDs) and are quite commonly used today, but according to new research, these drugs may increase your risk of heart attack by 20 to 50 percent. The researchers go on to state that this translates to only a small increased risk overall, at one percent a year.

“From the viewpoint of public health, even small increases in risk of heart attack are important because use of NSAIDs is so widespread,” said lead researcher Michele Bally, an epidemiologist at the University of Montreal Hospital Research Center.

NSAIDs are commonly used today to help treat pain and inflammation and are even the medication of choice for long-term conditions such as arthritis and other joint diseases. However, according to the researchers, an increased risk was seen after taking any dose for just one week, with an increased risk at higher doses. But the researchers admit that this particular study is only correlational.
“This is an observational study based on drug prescribing or dispensing, and not all potentially influential factors could be taken into account. Although this means that conclusions cannot be made about cause and effect, this study was the largest investigation of its type, and it was based on real-life observations,” Bally said.

The study in question analyzed nearly 447,000 participants, with more than 61,400 of them having had a previous heart attack. The meta-analysis attempted to find common trends between NSAID use and heart attack risk using a diverse pool of subjects. The researchers found that high-dose NSAID use within the first month posed the greatest risk of heart attack. Doses of more than 1,200mg of ibuprofen and over 750mg of naproxen were particularly harmful. This heightened risk was not seen to increase further, but the study didn’t evaluate repeat heart attacks, so it is still uncertain.

The researchers say we should consider all available treatment options and alternatives before deciding to treat occasional pain with NSAIDs, and they feel patients should be aware of their own risk for heart disease and discuss NSAID use with their doctor.