Home » Healthy Eating » Could your Mac N’ Cheese be Killing You? 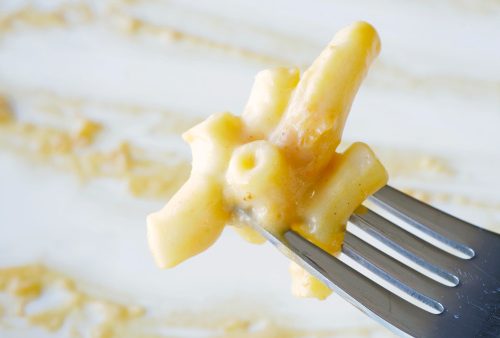 It’s an unfortunate yet indisputable fact that the vast majority of items in your local grocery store contain artificial food dyes. From snack foods, beverages, cereals, baked goods, desserts, candy, meats, fish, produce, cosmetics, lotions, medications and several other every-day products, we are in constant contact with artificial food dyes, whether we want to be or not.

Yellow 5 (Tartrazine) and Yellow 6 (Sunset Yellow) are two of the most common artificial food dyes in North America, providing a bright yellow, golden or orangy hue to millions of common foods and beverages that we eat on a regular basis. But while the FDA assures us that they are safe for consumption, they’ve been flat out banned in countries all across Europe, and the EU demands that food manufacturers clearly label their presence with a warning label. As thousands of us continue to innocently consume food products with these food dyes — and to feed them to our children — a growing body of research is showing that these colors are causing serious, long-term and irreversible health problems.

Human beings are instinctually programmed to be attracted to brightly colored foods. In the plant kingdom, the most colorful foods are usually also the most nutritious ones. The vibrant pigments and hues of fruits and vegetables indicate the variety of vital minerals, vitamins and nutrients that they contain, helping us stay healthy and avoid nutritional deficiencies. And so, capitalizing on this human instinct, we’ve been dying foods since ancient times, using the colorful juices and extracts of plants such as saffron, beets, turmeric and various flower petals to make our meals more appetizing.

Fast-forward to the twenty first century, and food dying has not only taken on an entirely new purpose, but now involves processes that are far less natural and far more dangerous. Fish and meats are cleverly dyed to mask the effects of the unnatural feeds they’ve been raised on; fruits and vegetables are artificially colored to disguise the fact that they’ve been picked before fully ripened. While the meat of wild, naturally bred and fed salmon is pink, salmon raised and fed in farmed captivity turn grey, dyed red before sale to hide these unappetizing effects. And processed foods, which make up a disturbing majority of the foods most of us eat, are by far the largest culprit when it comes to food dyes. Brightly painted with artificial chemicals, food manufacturers strive to attract us to these unnatural products while hiding the unsightly results of extensive over-processing. Today, North Americans consume more than 18 million pounds of artificial food dyes every year, a lot of which comes from unlabeled products or sources we aren’t even aware of.

Many of these modern, synthetic food dyes have demonstrated dangerous side effects and wound up banned by government health organizations – but not before they were haphazardly dumped into food products already on the market, using our children as guinea pigs before their alarming health effects pulled them back off the shelves (such as Orange 1, which caused many children to become seriously ill after eating colored Halloween candy back in the 1950s). Of the 24 food dyes that were once widely used in North America, 17 have since been banned because of dangerous (and often life-threatening) side effects.

Yet the artificial food dyes that remain on the “safe” list continue to raise questions about their health risks. The Public Citizen Health Research Group and several other concerned organizations continue to petition the FDA about banning Yellow 5 and 6.  But despite reports linking Yellow 5 and Yellow 6 with hyperactivity, allergic reactions, fatigue, anxiety, bronchial constriction, chromosomal damage and even cancerous tumors, the FDA certified the use of 8,700,000 pounds of these artificial dyes in 2005, to be used without discrimination in the most commonly consumed food products – especially in products targeting children.

Also known as Tartrazine, this dye is commonly found in ice creams, popsicles, candy (such as Gummy Bears, M&Ms, Peeps marshmallow treats, etc.), puddings and Jell-O, baked goods, popular beverages such as Mountain Dew and Kool-Aid, snacks like Doritos, potato chips and popcorn, chewing gum, mustards, cereals, noodles like Kraft Dinner products, as well as in skin products, cosmetics, oral medications and millions of other commonly used products.   It’s been under investigation by various groups, and completely banned in Austria, Norway and other European countries. The EU now requires manufacturers to label its presence with a warning of potential side effects. What’s caused this extreme global reaction?

For starters, Yellow 5 can trigger a variety of allergic reactions, from breathing difficulties to hives and skin rashes. There have also been an increasing number of reports of induced hyperactivity in children, from minor fidgeting to full-blown ADHD diagnoses. These behavioral issues often show significant improvement once the food dye is eliminated from the diet.

Yellow 5 has also been shown to cause dangerous mineral deficiencies. Zinc, an essential trace mineral, is critical to your body’s functioning, vital for metabolism, wound healing, bone strength, thyroid function, blood clotting, and many other physical and mental processes. Causing a significant loss of zinc through urine and saliva, Yellow 5 could not only cause nutritional deficiencies in a healthy person, but has also been shown to have even more extensive effects on people with ADHD (attention deficit disorder).

This food dye has been linked to several hazardous and life-threatening health effects, such as blurred vision, migraines, fatigue, anxiety, and even chromosomal damage, lymphomas and tumors of the thyroid. A study conducted by the Center for Science in the Public Interest also claims that Yellow 5 “may be contaminated with significant levels of carcinogens.”

Yellow 6 – Not So Sunny After All

The alternate name for Yellow 6 is Sunset Yellow — but this food dye is far from the peaceful, picturesque view that its nickname implies. It’s found in several beverages, like Sunny Delight and many fruit punches, as well as in Kraft macaroni & cheese products in the U.S. and thousands of candies, desserts, smoked meats and sausages.

Like Yellow 5, it’s been linked to allergic reactions and hyperactivity; it’s also been known to lead to congestion, upset stomach and abdominal pain. Studies have linked Yellow 6 to cancers of the kidneys and adrenal glands. Norway and Finland have banned Yellow 6, and the European Union has drastically reduced the acceptable concentration allowed in drinks.

Beyond The Rainbow of Artificial Food Dyes

If these shocking reports about artificial food dyes concern you, then you’re amongst a growing body of informed people who are striving to eliminate them from their diets and our food chain. I watch far too many people mindlessly dropping foods into their grocery carts without reading their labels, trusting that major government agencies will do the health and safety checking for them. Unfortunately, this is not the reality we live in.

While the U.S. lags behind Europe in labeling and banning dyes, it’s never too late to make a personal stand in the food choices you make for yourself and your family, and to stop purchasing all products that contain Yellow 5 and Yellow 6.

Beyond this, I ask that you consider the actual need for any kind of artificial dye in our food supply at all. For, if food manufacturers have chosen to paint over their products, then it begs a disturbingly ominous question – what are they really trying to hide?