Home » Cancer » Disease Management » Could You Be Denied Life-Saving Cancer Treatment Just Because of THIS? 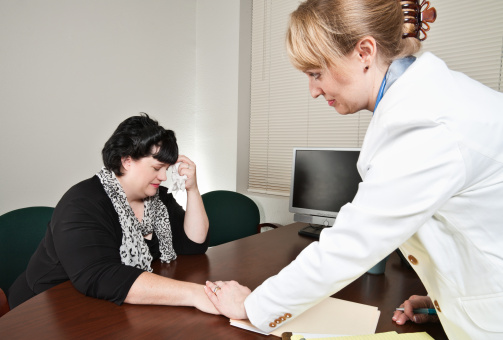 The list of health reasons I dutifully give my patients to lose weight keeps growing – perhaps it’s the same one you feel like you’ve heard from your own doctor on auto-repeat as well. I usually start off my speech on a positive note: “It’ll do wonders for how you feel every day! You’ll have more energy, your mood will be brighter, you’ll be able to keep up with your kids and grandkids like you never have before! And think of how much better you’ll feel about yourself!”

Then, with a more somber expression on my face, I launch into an explanation of how carrying extra pounds is no longer just an aesthetic problem: “You should know that research has shown that being overweight or obese significantly increases your risks of life-threatening health conditions, like hypertension, type 2 diabetes, liver and gallbladder disease, sleep apnea, respiratory problems, osteoarthritis, coronary heart disease, stroke, and so on. It even heightens your risks of dying from cancer.”

However, I was recently put in check in the midst of giving this speech to a particular patient who had just seen a special report on television. “Actually Dr. Marchione, that may not be fair to say. The fact that overweight and obese people have a higher risk of dying from cancer could have something to do with the fact that they tend to get shorted on the amount of cancer treatment they receive, shrinking their chances of actually beating the cancer. You know, it’s really unfair…”

And indeed, I had to concede, because she was right. A terrifying trend of under-treatment of obese cancer patients is an issue that caught my attention this past August, one that is serious enough to cause the American Society of Clinical Oncology to recently adjust its chemotherapy treatment procedural guidelines to help steer doctors away from this grave mistake. It’s a situation that has cast medical practitioners into a very uncomfortable spotlight, and I want to take this opportunity to illuminate this serious issue to you today.

Indeed, we’ve made huge strides in the war on cancer in the past few decades. Thanks to painstaking work and billions of dollars poured into cancer research and treatment development, present day prognoses for people diagnosed with various forms of cancer are now far more optimistic than ever before.

But is this new ray of hope shining equally upon everybody at risk for cancer? Or are some groups of people – due to lingering misinformation and misguided medical practices – still being left in the dark when it comes to the appropriate cancer treatment that is their due? Could how much you weigh make all the difference between receiving effective cancer treatment that will save your life, and receiving inadequate therapy that significantly decreases your chances for survival?

According to recent studies that are finding that obese people are more likely to die from cancer, the disturbing answer to this question is “yes.” And the reason for this may be due to a shocking trend of under-treatment of cancer in patients who are obese, which can severely lower their odds of surviving from this dreadful illness.

Cancer is not a single disease, but a broad category of diverse diseases. All are characterized by uncontrolled cell growth and the formation of malignant tumors known as neoplasms. Treatment approaches must therefore attempt to walk a tenuous tightrope of trying to annihilate cancer tissue without killing the patient’s healthy body tissue. Currently practiced treatment approaches range from improved surgical techniques, to tightly-targeted radiation treatments, to powerful cancer-killing chemotherapy drugs.

The effectiveness and safety of chemotherapy – the most widely used treatment method – rely upon carefully calibrated information about how much chemotherapy drug can be given to successfully kill the cancer while sparing the patient from toxicity, which can create tremendously uncomfortable side effects and could lead to other serious health problems.

Every patient is slightly different. Differences in gender, ethnicity, genetic makeup, or even the kinds of foods or other drugs a patient has been taking, can influence how a drug is metabolized by a given patient. Some people may eliminate or neutralize a drug far more quickly than others, while others may experience unexpected side effects. Doctors must consider several individual aspects about a particular patient when determining how much of a drug to give them, using specific formulas which are largely based upon a patient’s body size, or actual body weight (ABW).

So, ideally, dosing guidelines should ensure that a slim 100-pound woman with cancer and a hefty 200-pound woman with cancer of roughly equal height should receive appropriate amounts of chemotherapy drug, in accordance with their actual body mass. Ideally, the lighter woman should presumably receive about half the absolute amount of the drug during her treatments, while the larger woman would get more. Ultimately, roughly the same concentration of drug should be circulating throughout either woman’s body, attacking stray cancer cells without making her even sicker.

But recent reports in the medical literature suggest that this is often not the case. Overweight and obese patients may not be receiving the correct, full amounts of the chemotherapy drugs they need. Two experts weighed in on the subject earlier this year, in the journal Nature Reviews Clinical Oncology: “There is considerable evidence that reductions in the recommended dose intensity often occurs in actual clinical practice, particularly among overweight and obese patients with cancer,” the authors wrote. In fact, some studies suggest that up to 40 percent of obese patients are receiving less than 85 percent of the chemotherapy dosage that they require. This significantly worsens their odds of survival.

Why is this happening? Well, evidently, some oncologists are erring too far on the side of caution, giving their obese patients somewhat smaller amounts of some chemotherapy drugs than they should, despite the fact that their total body mass indicates that they require more of the drug than smaller sized patients. But new science coming to light is showing that this caution may be unwarranted, and needs to be corrected. This is especially true in light of the case that overweight and obese patients seem to tolerate chemo even better than lower body weight people, causing toxicity concerns to be unfounded.

The dangers of under-treating obese patients are further punctuated by something we’ve known for over a decade – being obese is already an independent risk factor for cancer. As a report from the American Cancer Society put it: “increased body weight was associated with increased death rates for all cancers combined and for cancers at multiple specific sites.” Published in the influential New England Journal of Medicine, the report was based on a decades-long study of nearly one million men and women in the United States.

This means that, essentially, being obese is a double-whammy. It significantly increases your risk of being diagnosed with cancer in the first place, and it also may mean that you are less likely to receive the full dose of chemotherapy treatment that you may actually require to treat the cancer and fully recover from it.

Although there’s certainly been a lot of discrimination towards obese people practiced in the medical industry, as well as in most other areas of society, I want to make sure that this particular issue is not wrongfully lumped in with all the rest. While chemotherapy is a boon when it comes to cancer treatment, don’t forget that, at the end of the day, it is still a highly toxic poison to the body, which is why it is always critical that doctors tread with care when administering it.

Doctors guilty of deviating from proper dosing methods and under-treating obese cancer patients are likely acting upon fears of complications arising from chemotherapy toxicity, which not only make the patient feel extremely weak and unwell but also heighten risks of other problems, such as congestive heart failure. Further, as a large percentage of obese people also suffer from other conditions, such as type 2 diabetes, many doctors choose to tread more carefully with chemotherapy drug administration in order to avoid triggering a complex chain of other unforeseen health reactions. Certainly, these were once legitimate and reasonable concerns that responsible physicians had to consider when treating the individual needs of a cancer patient, and demonstrates how complicated medical treatment can get.

But while this problem does not arise from discrimination against the obese population, the result, nevertheless, is that they’ve certainly had to pay for it. The problem, unfortunately, arises from the most recent and currently substantive scientific evidence not always trickling down fast enough to dictate actual medical practices. Consequentially, a growing section of the population is being left in a place of real danger. “There’s little doubt,” says Dr. Lyman, oncologist at Duke University, “that some degree of under-treatment is contributing to the higher mortality and reoccurrence rates of obese patients.”

Unfortunately, the number of people who are overweight or obese is growing at a staggering rate worldwide – it’s critical that the medical community start to pay attention, and that it address all of the many implications of this disturbing and life-threatening trend before it’s too late.