Home » Health News » Could This Amino Acid Be Essential in Memory Preservation and Battling Dementia? 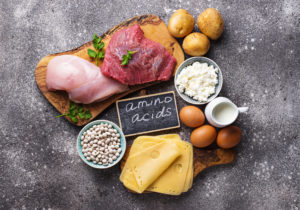 Nutrition plays a big role in how your brain works. Aside from providing energy, food choices also influence blood flow in your brain, inflammation, and your overall health.

You might not know this, but your brain uses a lot of the overall energy available to your body, to the tune of roughly 20%. One nutrient that may be essential to its function is an amino acid called L-serine.

Researchers in France have recently shown that a metabolic pathway involving this amino acid may play a major role in Alzheimer’s disease and memory problems.

For your brain to work properly, it relies on neurons and surrounding cells to co-operate. They all fueled by stored glucose—sugar—in your body. One cell group, called astrocytes, uses that glucose to manufacture L-serine.

When this energy metabolism breaks down, it’s harder for astrocytes to utilize glucose, ultimately resulting in impaired brain functioning and memory.

But can supplementing with L-serine help keep the supply in order despite the metabolic breakdown? Perhaps. In fact, a recent study in mice has shown it can

The study, which was published in the March edition of Cell Metabolism, showed memory and spatial awareness were restored in mice with Alzheimer’s. This is a very interesting finding that may influence how memory loss and Alzheimer’s are treated.

Currently, L-serine supplement regimens are being tested in human populations for their effect on memory and Alzheimer’s. Doses are 15 grams, twice per day, and supplements are available in a variety of forms.

The results of these tests, however, have not been released and it is not safe, at this point, to recommend this treatment for memory troubles.

But that doesn’t mean the study is not promising and you can’t make an effort to eat more L-serine-rich foods. After all, whole foods are unlikely to lead to nutritional complications.

If you want to attempt to protect your memory, including eggs, sweet potatoes, soy products, and meat may be worthwhile. Each is a decent source of L-serine to help supplement your natural production.