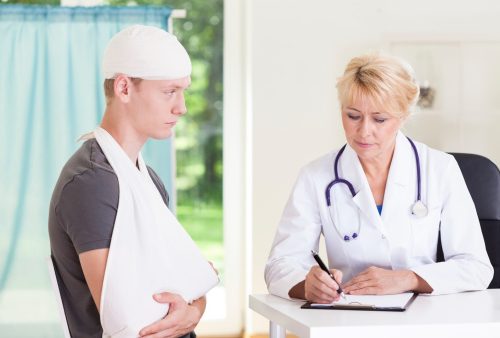 A recent study, which looked at health insurance claims of almost nine million Americans, discovered that concussion diagnoses doubled between 2007 and 2014. Does this mean there is an actual increase in injuries, diagnoses, or both?

Most significantly, the injury rates among 10- to 14-year-olds tripled, followed by 15- to 19-year-olds.

Lead researcher Dr. Alan Zhang of the University of California, San Francisco, says the causes of the concussions are unknown, but he believes head injuries from sports such as bike riding and skate boarding are the main culprits here.

Previous studies also showed an increase in concussions, however, they focused on specific groups, like high school athletes. According to Zhang, special attention has been given to sports-related concussions lately. As a result, coaches, adults, and young athletes are being educated about identifying and responding to a concussion, should that situation arise.
There have been major changes since 2009 throughout the U.S. around “return to play” laws and regulations, ensuring youth are evaluated for potential concussion symptoms as well as the requirement that youth be immediately removed from a sports game if a concussion is suspected. In addition, a doctor’s note is needed before they can return to the sport, according to the U.S. Centers for Disease Control and Prevention (CDC). This was not the case in 2007, the first year the study has analyzed.

Kenneth Podell, a neuropsychologist and director of the Houston Methodist Concussion Center, says the increase in concussions is a good thing. “I see this as a positive trend,” he said. “We’re finally taking this condition as seriously as we should.”

“Is this because more kids are outside being active?” he said. “We don’t have the data to know.”

According to the CDC, more than 248,000 U.S. children and teens end up in the emergency room each year because of a concussion sustained in sports or recreational activities, and that is only in the ER. Recent studies estimate that the number of concussion-related injuries is closer to two million per year, and even that may be too low.

In the study using records from 8.8 million people throughout the U.S. part of one large insurance plan, 44,000 were diagnosed with a concussion between 2007 and 2014. When looking at the data, 10- to 19-year-olds accounted for one-third of those diagnoses. Older teens sustained concussions at a rate of 16.5 for every 1,000 patients. That figure was 10.5 per 1,000 patients among 10- to 14-year-olds – making them the top-ranking group.

Researchers urge parents not to panic, as sports and activity are healthy for our children. However, precautions should be taken, ensuring children are wearing helmets when biking, skating, or snowboarding, for example. Always make sure kids have the proper protective equipment, especially with organized sports. Take time to educate your child on the strategies for reducing their risk of a blow to the head when engaged in sports.

Contrary to common belief, most concussions do not knock people unconscious. Symptoms like headache, dizziness, nausea, ringing in the ears, fatigue, and confusion are much more common. Warning symptoms that do require immediate medical attention include slurred speech, numbness, balance problems, severe headache, or vomiting more than once. A call to the doctor for milder symptoms like a queasy stomach and dizziness is also a good idea. Trust your parental instinct.