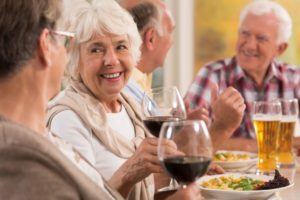 The study looked at a prospective cohort study involving 5,888 community-dwelling adults over the age of 65. Of the group, 393 individuals were diagnosed with heart failure during the nine-year follow-up period.

The researchers uncovered that 32.8 percent of participants reported alcohol consumption post-heart failure diagnosis. Consumption of seven or less alcoholic beverages a week was associated with a mean survival of 383 days compared to those who did not consume alcohol.

Always speak to your doctor about alcohol consumption. Every person is different, and depending on what medications you’re taking, alcohol may be dangerous.