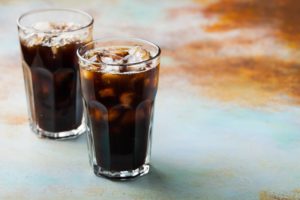 Senior co-author Dr. Jihye Yun explained that although the study was conducted on mice, “our findings in animal models suggest that chronic consumption of sugary drinks can shorten the time it takes [colon] cancer to develop.”

The researchers noted that there have been more cases of colon cancer among young people over the last decade, which coincides with a rise in sugary beverage consumption. If the current study results are replicated in humans, then it could explain this association.

It has been long unknown if sugary beverages promoted tumor growth, so to uncover the answer to this question, researchers looked at mice models of colon cancer. These mice were given sweetened water with high fructose corn syrup, which leads to more advanced tumors that were larger compared to those in mice who received plain water.

Lead author Dr. Marcus Goncalves explained the study didn’t “show that giving high-fructose syrup causes new tumors, because these mice develop tumors even on normal diets free of added sugar … But when you give them this additional sugar, the tumors grow much bigger.”
These effects were seen in as little as the equivalent to one 12-ounce soda can consumption a day.

Dr. Patrick Boland, who was not involved in the study added, “This study provides some potential explanation as to why large amounts of high-fructose corn syrup may not be good for our health in general and specifically as it relates to colon cancer. We already have data suggesting individuals with colon cancer or those at risk should probably limit the number of sugary drinks they have as much as possible.”

It is well known that sugary beverages are not the healthiest, and although these findings aren’t confirmed, they do shed possible light on the dangers of high fructose corn syrup and why we should limit our intake of these types of beverages.