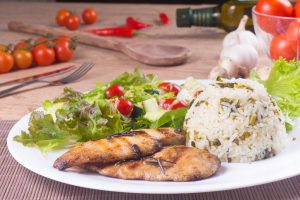 Chronic kidney disease risk may be reduced with the DASH diet, a style of eating recommended to lower blood pressure. The diet consists of legumes, nuts, low sodium, low-fat dairy, whole grains, fruits, and vegetables. The study found that aside from lowering blood pressure, the DASH diet offers an extra benefit of reducing the risk of developing chronic kidney disease over the span of two decades.

Study leader Casey M. Rebholz said, “In addition to offering other health benefits, consuming a DASH-style diet could help reduce the risk of developing kidney disease. The great thing about this finding is that we aren’t talking about a fad diet. This is something that many physicians already recommend to help prevent chronic disease.”

The researchers examined records from the Atherosclerosis Risk in Communities (ARIC) Study, which followed 15,792 middle-aged adults for over 20 years. Every two years, the participants had to complete a 66-item food survey, reporting on the frequency of consuming the listed items and portion size.

There were no specific instructions or recommendations on what or how to eat. The participants’ adherence to the DASH style of eating was categorized based on their survey responses.

In addition, the researchers assessed the participants’ risk of developing kidney disease over time by analyzing their kidney function based on blood tests and medical records pertaining to any kidney-related disease, surgery, hospitalization, or mortality.

For the study, the researchers looked at 41 participants experiencing recurrent kidney stones who followed either the DASH diet or a low-oxalate diet.

Participants on the DASH diet had a 35 percent reduction in the risk of kidney stone formation, while those on a low-oxalate diet only saw a 14 percent drop.

Dr. Kerry Willis, the senior vice-president for Scientific Activities at the National Kidney Foundation, explained, “Previous studies have recommended that those with kidney stones follow a low-oxalate diet to reduce one’s chances of forming another stone. However, many high oxalate foods are healthful and a low-oxalate diet can be very restrictive. The DASH diet reflects a more balanced diet and, as a result, may be easier and more realistic to follow long term.”

In addition to a high intake of fruits and vegetables, adequate hydration is also recommended for kidney stone prevention.

Blood pressure management is imperative for kidney disease patients. The researchers conducted three studies to examine the effects of diet and blood pressure on kidney disease. As lead researcher Nimrit Goraya said, “Our findings suggest that an apple a day keeps the nephrologist away.”

Dr. Crews explained, “An unhealthy diet is strongly associated with kidney disease among poor individuals. Dietary interventions tailored to meet the needs of this population may help to reduce disparities in kidney disease.”

As you can see, diet does play an important role in kidney function. Maintaining a healthy, balanced diet is integral for your kidneys and your overall health.