Home » Health News » Chat It up with a Stranger: It Could Lead to Health Boosts for Both of You 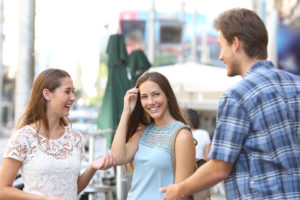 Most people spend the bulk of their day surrounded by strangers. Fellow shoppers, commuters, diners, and those waiting for the doctor, however, typically sit in silence. But breaking the ice could help your health in a number of ways.

Research suggests that talking to strangers can not only improve mood and well-being but benefit your stress levels and heart health. The problem is, however, that most people are averse to talking to people they don’t know.

The reason why might be the result of a massive misconception. You see, surveys suggest that most people think that others don’t want to be spoken to by a stranger. Research, however, suggests the opposite: the majority of people are willing to engage in a conversation when a stranger strikes one up.

Conversing with strangers does a few things that pay dividends for health. For starters, it allows people to feel connected to the community around them. It can also make relatively unpleasant situations—like sitting on the bus or waiting for your doctor to call your name—that much better.

Social isolation, on the other hand, is closely associated with health risks that are comparable to smoking and obesity. Some research indicates that human connection is more important than income when it comes to happiness.

A 2014 study found that people who felt more connected to their community were significantly less likely to suffer a heart attack. On a seven-point scale created by researchers, people who had a stronger sense of community—those who spoke to strangers or others in their community—enjoyed a 17-percent lower heart attack risk for each point.

The health benefits are not exclusive to the instigator, either. When people are spoken to by a stranger, receive a thank-you card, or receive a random act of kindness, their happiness goes up too. The more connected people are, the better they tend to feel and the less stressed they are.

Stress, as we know, can play a major role in sleeplessness, physical pain, blood pressure, obesity, and heart-related illnesses.

So next time a stranger approaches you or you want to strike a conversation with someone you don’t know, go for it! You likely have far more to gain than to lose.