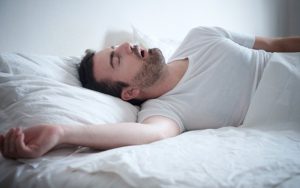 In our world of technology and fast-paced lifestyles, sleep disorders are prevalent and can be detrimental to our health. Until now, researchers have sought treatments for these disorders by going straight to the source: the brain. It is widely accepted that the brain is the control center for all aspects of sleep.

A new study has found that certain disorders may actually benefit from treatments focused on the muscles, however. The study, done at UT Southwestern, has found that a certain protein in the muscles can reduce the effects of sleep loss. So far, this has only been tested in mice during this research.


Muscle protein causes tiredness when it is missing

The BMAL1 protein, which is a circadian clock protein, is found in the muscles and helps control the length and duration of sleep. What is interesting about the protein was that its presence or absence in the brain had no effect on the sleep quality of the mice. But when it was added to their muscles, the BMAL1 protein allowed the mice to recover from sleep deprivation more quickly.

On top of this, when the researchers removed the BMAL1 from the muscles of the mice, their normal sleep patterns were drastically disrupted. They suffered from a greater need for sleep, they demonstrated a deeper sleep, and showed a reduced ability to recover from sleep deprivation compared to when BMAL1 was added to the muscles.

The researchers plan to continue their work in learning whether these same pathways exist in humans and whether the presence of BMAL1 is comparable and has the same effect on sleep deprivation as it did in the mice included in this research. The mice show obvious signs that their muscles communicate with the brain to indicate when to sleep and the quality of sleep needed.

These findings offer a potential new target for sleep disorder treatments. These treatments would also be helpful for those working in environments that require extended periods of wakefulness, such as military or commercial piloting. This revolutionary study has shown that sleep is not only controlled in the brain, but also in other parts of the body. The new evidence of muscles affecting sleep processes opens up a new area of future research for scientists.