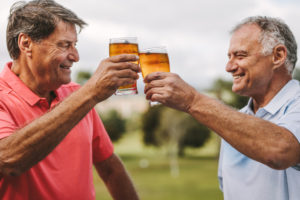 Alcohol consumption was once synonymous with liver health. But recently, it’s taken a bit of a backseat to non-alcoholic fatty liver disease, a version of liver disease caused by poor diet.

But drinking too much booze can still harm your liver in a big way. In fact, it can do a lot more than lead to liver disease. Heavy drinking can affect your heart, brain, and gut health while also promoting inflammation throughout the body.

Heavy drinkers are also at an increased risk for nutrient deficiencies.

Keeping a close eye on how much you drink can not only help protect your liver but many of the other organs and systems operating to keep you healthy.

There is research to suggest that light-to-moderate alcohol consumption can have benefits in certain situations. A glass of red wine per day, for example, may improve blood flow and vein health in seniors. Relaxing with a drink in the company of friends can also reduce stress.

But for the most part, alcohol poses more dangers than benefits. Drinking more than the recommended amount of one standard drink per day for women, and two for men (a number based on weight) can boost the risk of a series of illnesses.

There are a few methods you can employ to get drinking under control. Such measures may help promote future liver health and reduce the risk of serious chronic illness.

Recent research suggests that Alcoholics Anonymous (AA) remains one of the top methods of treatment.

But there are others.

One potential way of curbing alcohol consumption is an herb called Kudzu.

Kudzu has been used for more than a thousand years by Chinese medicine practitioners to curb alcohol consumption, and a study from Harvard University showed it might help heavy drinkers drink less.

The study showed that people who took a Kudzu pill drank less beer than those taking a placebo after being instructed to drink up to six beers. Researchers believe that the herb helps people feel more satisfied with less.

Taking any herbal supplements should be preceded by talking to your doctor to ensure safety.

If you’re struggling to get drinking under control and want to protect your liver and reduce the risk for other illnesses, Kudzu might help. There are also several other treatments that might help limit drinking.