Home » Health News » Can This Exercise Tame Your Migraine Headaches? 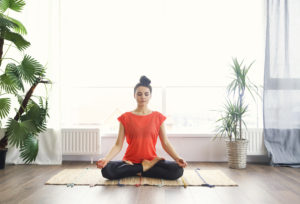 There are several factors that can contribute to episodic migraine headaches. Lights, a lack of sleep, stress, food, and even lighting can trigger the relentless pounding that has the potential to leave you incapacitated.

What’s worse is that the most common treatment, medication, only works about half of the time.

Add that on to the fact that roughly 10-percent of people with migraines abandon medication because of unwanted side effects, roughly 60-percent of sufferers are unable to get adequate relief.

But a new study published in Neurology is showing that regularly practicing yoga might help reduce the impact of episodic migraines on your life.

During one-hour sessions three times per week for one month, the yoga group received instruction on breathing techniques, relaxation, and yoga postures from a yoga therapist. Following training, they did yoga routines five days per week for two months from home.

By chance, the section of people randomized to the yoga group suffered a higher frequency of migraines.

Although both groups reported lower levels of migraine frequency and intensity, the yoga group had significantly fewer headaches and when they did get one, they were less severe. They also had to take fewer pills throughout the study.

It is unclear exactly why yoga helped treat migraines, but it may have something to do with its calming and meditative effects. Other research has shown yoga can help relieve stress, encourage blood flow, and reduce pain.

If you’re suffering from migraines, having trouble sleeping, experience joint pain, or are feeling stressed, yoga may help. Finding an online instructor or an at-home course can help you learn the moves and breathing techniques to set you on your way.