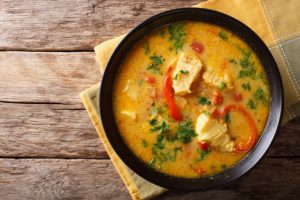 This might sound crazy, but your minestrone soup recipe could help ward off malaria. It doesn’t stop there, either. Broths are becoming increasingly noted for their health benefits, ranging from protection against infection to joint health.

A recent study by Imperial College London found that soup was able to stop the spread of Plasmodium falciparum, the malaria parasite, in the disease-growing stage. To achieve this result, researchers asked students to bring in broths from family recipes that had been passed down through generations. Student backgrounds spanned across Europe, North Africa, and the Middle East.

Two samples, one of which was a red cabbaged-based minestrone broth, worked as well as a leading antimalarial drug.

All in all, five of the 56 samples studied produced antibiotic effects.

Bone broth is highly nutritious and is rich in vitamins and minerals including calcium, magnesium, and phosphorous. It also contains collagen, which may help explain its benefits for joint pain. Research has suggested collagen may help repair damaged joints and limit joint pain, which makes it potentially useful for people with sore joints.

There is also evidence that bone broth can help reduce inflammation and promote gut health. Bone broth is an excellent source of an amino acid called glutamine, which is associated with improved gut health and improved symptoms in people with inflammatory bowel disease.

Soups may offer a little more than just a winter warm up. When you’re using healthy fresh and natural ingredients soups can serve as a great source of nutrition and potentially provide some big benefits. It appears that cabbage-based minestrone broths and bone broths may offer specific benefits that you might not expect.

It’s unknown if the antibiotic effects of minestrone soup will help battle other illnesses like the flu, but these findings are interesting nonetheless!