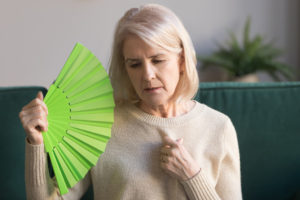 A new study is showing that a healthy sex life may pay even more dividends than originally thought. If you’re yet to enter menopause, you might want to keep reading,

Already shown to improve immunity, blood pressure, reduce pain, and more, a healthy sex life might also delay the onset of menopause. Research from the University College of London is showing that a more active sex life is associated with a later onset of menopause.

Researchers looked at nearly 3,000 women for more than 10 years. The study group was first interviewed in 1996–1997 when they were age 45. At the time of the interviews, none of the women had entered menopause, but 46% were starting to have perimenopausal symptoms like changes in period cycle and hot flashes.

Why is this finding potentially important? Because menopause is associated with a number of serious health conditions in women. Delaying menopause can mean stronger bones and a lower risk for fracture or osteoporosis, as well as lower cholesterol levels.

So why does sexual stimulation appear to delay menopause? According to the study’s lead author, Megan Arnot, “There may be an energetic trade-off between investing energy into ovulation and investing elsewhere, such as keeping active looking after grandchildren.”

This “use it or lose it” idea suggests that if a woman is not having sex, and therefore has no chance of pregnancy, the body looks at ovulation as a pointless process can begin menopause.

If you’re yet to hit menopause and want to delay it, boosting sexual stimulation could help buy some time. Menopause, of course, is unavoidable. But a slower, later transition is certainly appealing to some!