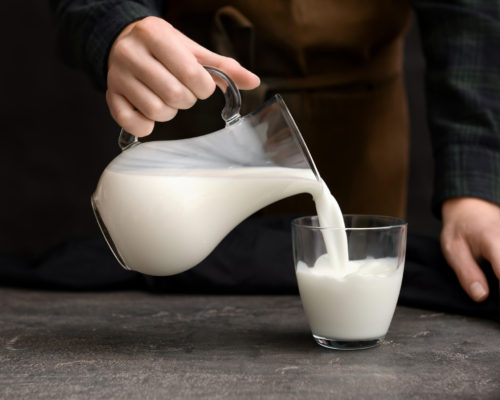 Milk has a rather interesting standing when it comes to its place in a healthy diet. Some suggest it’s got a place, while others aren’t so sure. Perhaps more confusingly, both stances are backed by research.

Two-percent fat cow’s milk is higher in calories than its one-percent or non-fat (skim) varieties. The fat comes from saturated fat, which can add some risks for certain people. That’s generally why it’s not included in heart-healthy diets like the DASH, which encourages no-fat dairy.

Now a new study is suggesting that full-fat milk may speed up “biological aging,” potentially meaning that skim milk may be a useful addition to your anti-aging routine.

The study found that people who regularly drank 2% milk had shorter telomeres than those who drank 1% or skim varieties of cow’s milk. Telomeres are little pits of DNA that encapsulate the ends of chromosomes to prevent them from fraying or sticking together.

To get a visual, picture a shoelace—the chromosomes are the lace and the telomeres are the plastic caps at each end. Telomere length is closely associated with lifespan and overall health. They do get shorter with age, however, lifestyle factors play a big role.

This new study, published in the journal Oxidative Medicine and Cellular Longevity, looked at data from 5,834 U.S. adults. Roughly 60% identified drinking 2% milk, 27% drank 1% or skim milk, and 13% did not drink cow’s milk.

On average, people who drank higher fat milk had shorter telomeres. Researchers suggested that each increased percentage point of milk fat was linked to a 4.5-year increase in biological aging.

Researchers did note, however, that the difference was only apparent in people who drank milk regularly. Occasional drinkers did not experience the symptom of accelerated aging, however, those that drank it once per week did. Daily full-fat milk drinkers had the shortest telomeres on average.

This study, however, does not prove that 2% milk accelerates aging or increases the risk of death. The results may be a result of total saturated fat and calories in a person’s diet, not simply milk consumption. That said, opting for a lower-calorie diet that includes skim milk might help delay aging by helping to manage weight and cholesterol.