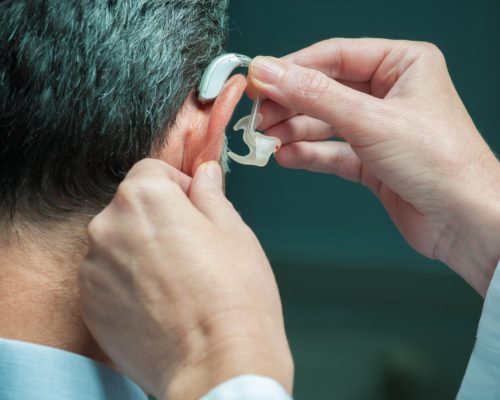 The results of a new study are showing that hearing aids can do far more than improve communication. And the benefits may extend further than you think.

Having mild or moderate hearing impairment makes like a struggle. It’s difficult, if not impossible, to hear the voices of loved ones. An outing to your favorite restaurant can become a brain-scrambling experience, yet only about 13-percent of people with hearing impairment use hearing aids to restore their sense of sound.

Roughly one in four adults aged 65 to 74 in the United States have disabling hearing impairment. That number doubles for those 75 and over. And a new study is showing that using a hearing aid to treat hearing loss can significantly reduce the risk or delay onset of dementia—including Alzheimer’s—depression, anxiety, and falls. Therefore, these devices can do a lot more for your health and longevity than you may expect.

A new study, published in the Journal of American Geriatrics, is helping to add weight to this theory. Researchers from the University of Michigan identified that American adults who wore hearing aids to compensate for hearing impairment had:

All of this points to the idea that better hearing leads to improvements in areas of cognition like memory and spatial awareness.

Healthy ears are a gateway to the world, and optimal function may go a long way in promoting physical and mental health. If you’re having trouble hearing your loved ones or carrying a conversation in a crowded room, it is a good idea to get your ears checked. Doing so could have the potential to play a significant role in your overall health.

*Relative risk is compared to those with hearing impairment but did not wear a hearing aid.