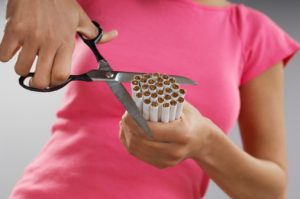 The habit of smoking still causes about one in five deaths in the United States, so researchers continue to examine the problem, and what they discovered recently is that brain damage during a stroke could in fact help smokers quit smoking.

Scientists conducted a pair of studies that showed smokers who suffered a stroke in the area of the brain called insular cortex, were more likely to quit smoking than people who had strokes in other parts of the brain.

Since previous studies hinted that a central region of the brain (insular cortex) might have something to do with emotional reactions that include substance use, scientists decided to test whether smokers who suffered brain damage during stroke are more likely to quit smoking. They examined whether stroke patients started smoking again after their stroke, as well as how strong their craving for a cigarette was during their stay in the hospital. An MRI and CT scans helped determine if the stroke occurred in the insular cortex or in another part of the brain.

The first study looked at withdrawal. When you are in a hospital, you are forced to refrain from smoking, so this made it a lot easier for the researchers to monitor the severity of withdrawal symptoms in the study participants. They were able to measure anger, anxiety, cravings, concentration, hunger, sleep and sadness. They discovered that the patients with strokes in the insular cortex had fewer withdrawal symptoms than those who had brain damage in other parts of the brain.

The second study looked at the participants after hospitalization. They were followed for three months to determine whether or not they started smoking again. Almost twice as many patients who experienced a stroke in the insular cortex quit smoking, compared to patients with strokes in other regions of the brain. It was a 70 percent verses 37 percent result.

The research, published in the journal Addiction and Addictive Behaviors may help scientist develop possible therapies to target the insular cortex, thus disrupting addiction. The exciting potential is that it could apply to other forms of addiction other than smoking. 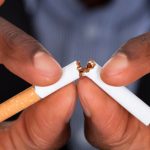 The ideal approach is to never start smoking in the first place. The nicotine in cigarettes alters the chemicals in your brain and is highly addictive. Some researchers have suggested that nicotine is even more addictive than heroin.

Smoking is a leading cause of stroke and heart disease. When you have a stroke, brain damage can occur. A stroke happens when a clot blocks the blood supply to part of the brain. It can also happen when a blood vessel around the brain bursts. The effect of stroke on the brain can be life altering. It can lead to paralysis, memory loss, muscle weakness, speech loss or death.

Smoking can increase the risk of high blood pressure, which is one of the biggest factors leading to stroke. The chemicals that are in cigarettes include carbon monoxide, arsenic, formaldehyde and cyanide. They damage blood vessels and can cause narrowing of the arteries. Smoking can also increase your cholesterol level, as well as your risk of Alzheimer’s disease. Regular exercise and good nutrition can be good for your brain health, but obviously not smoking or quitting if you have already formed the habit is key.

Effects of stroke on the brain

The brain is a delicate and complicated organ. It controls so many of our bodily functions. The effects of a stroke on the brain depends on the area of the brain where the damage to brain tissue has occurred. When stroke takes place near the back of the brain for example, it can often impact vision. If there is damage to the right side of the brain, memory loss can occur and behavior can change, as well as paralysis on the right side. When the stroke damage is on the left side, paralysis will be on the left and speech tends to be affected. Sometimes a stroke can be in the stem of the brain. In this case, there is an impact on both sides of the body and a chance of paralysis from the neck down. 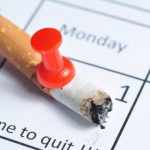 People who have tried to quit smoking often say that it is one of the biggest challenges they have ever faced. However, it is the best thing you can do for yourself. You may have to try several times, but when your health depends on it, it is worth trying over and over until you get it right.

Here are some tips to quit smoking that millions of smokers around the world have tried and succeeded with.

Stress can lower our defenses and make it hard to meet the difficult challenges in life. This applies to kicking habits like smoking, so managing stress is important if you are trying to quit. Physical activity, deep breathing and meditation can be really helpful when we are pushed to the limit and tempted to fall into bad habits.

Prescription drugs used to treat cigarette addiction focus on the brain’s reward pathways by disrupting the release of dopamine in the brain. Studies show that people who use these drugs tend to have a high rate of relapse. About 70 percent of those who use the prescriptions report that they eventually go back to smoking. Nicotine patches and lozenges have similar success rate. The study involving the insular cortex provides hope that new therapies might soon be developed to make it easier to help smokers quit for good.