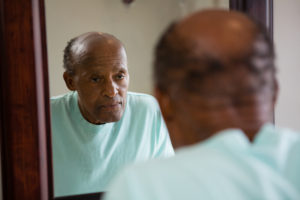 One of the many commonalities between my dad and me is that we’re both nighttime urinators. For me, it’s a quick rise, release, and back to bed. For him, it’s a different story altogether.

Like roughly half of men over age 70, he gets up two or three times per night to relieve himself. It impedes his ability to get quality sleep and plays a large role in how he feels during the day.

Getting up to pee throughout the night is known as “nocturia,” and depending on how it influences you, it may be cause for concern. But it might not be either. Nocturia has a variety of causes and it might be more manageable than you think.

Your mind might instantly head to the prostate. And it’s true that an overgrown prostate, known as benign prostatic hyperplasia (BPH), can lead to overnight urges to hit the bathroom. But if you’re not experiencing similar symptoms throughout the day, it’s probably not your prostate.

BPH’s symptoms aren’t limited to nocturnal hours. If it is what’s causing your nighttime urges, you’d notice the same urges during the day—a weak and intermittent stream, and incomplete emptying.

Nocturia may also be a side effect of obstructive sleep apnea. If you’re being woken throughout the night to gasp for air, there is simply more of an opportunity to get up and pee. If you’re lying there awake anyways, why not? Your muscles may also contract when breathing stops, helping to push urine out.

Lastly, it may just be a result of natural fluid release. Over the course of the day, water accumulates in your legs. Lying down makes it easier for urine to move into the bladder, creating the urge to get up and go.

To help determine if your nighttime peeing is caused by BPH, an overactive bladder, or another condition, pay attention to the following symptoms:

Some things worth trying to reduce the chances of nighttime urination include: