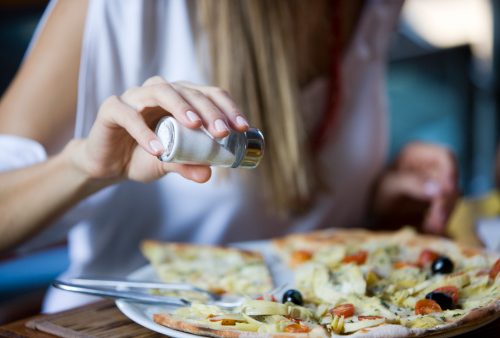 New findings suggest that a low-salt diet does not necessarily help improve bone health in menopausal women. Corresponding author Dr. Laura D. Carbone said, “When we started the study, we thought we were going to be telling everyone again that a low-salt diet is good for your bones. Instead, our message is, low-sodium intake by itself is not likely to be beneficial to your bones. We definitely don’t want to go further than that and say high sodium is good for them.”

There is some logic behind the idea that low salt intake is better for bones. Salt increases calcium excretion, which reduces calcium, thus contributing to weak bones. After the teen years, calcium stops being replenished into bones. Sodium can still cause calcium to be released, thus leading to low bone density.
Guidelines from the Osteoporosis Foundations recommend a low-sodium diet, but the new study examines if there is any benefits to bone from it.

The researchers examined data from nearly 70,000 postmenopausal women followed for 11 years. They had fracture data on all the women and assessed the bone mineral density in 4,400 women.

Their findings were mixed, revealing that salt intake was not a contributing factor to poor bone health. Some studies found that higher salt intake was associated with stronger bones. When they factored in body mass index (BMI), no association was found between salt intake, bone density, and fracture rates.

Possible explanation for the findings stems from the fact that when sodium intake drops, the body has a natural mechanism to increase bone resorption.

A prospective study should be the next step to either confirm or deny findings. The research should include holidays and weekends, as that is when sodium intake typically increases.

For now, the researchers suggest that a high calcium diet along with regular exercise are some good tips to maintain bone strength.