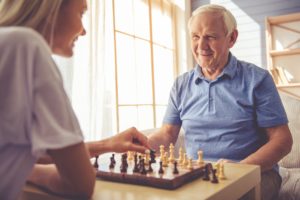 A game of Trivial Pursuit may do more for your brain that offering an ego boost. If you’re concerned about memory loss as you age—and let’s be real, who isn’t —keep reading.

Some brand-new research is showing that people that play board games, cards, bingo, and other non-digital games—even crosswords—are more likely to maintain cognitive health with age than those that don’t.

Researchers from the University of Edinburgh in the UK followed 1,091 participants born in 1936 using data from the Lothoan Birth Cohort 1936, which is a long-term study used to evaluate mental health and capacity over long periods. Cognitive tests were delivered to participants at age 11, 70, 73, 76, and 79 to track progress. Researchers asked participants how often they played board games or “analog” games at age 70 and 76. The ones that did experienced less cognitive decline.

This could be for a few reasons. One is that games get you thinking and lead to plenty activity in the brain. When the brain is stimulated, neurons are firing around and keeping pathways open and in decent shape, perhaps making it less likely for cells to die. Another benefit of games is that they are fun, and when things are fun it’s more likely you’ll activate parts of the brain associated with memory.

Games also re-enforce decision-making, strategizing, and other key brain functions. Lastly, games can be a great way to get together with friends and have a laugh or chat, helping to keep you engaged. Social engagement is closely associated with improved mood and mental well-being.

Some games that may be useful for promoting memory and cognition include:

This is by no means all of the games that can help, but a small selection. Virtually anything that gets the mind activated and playing can be useful—even video games!