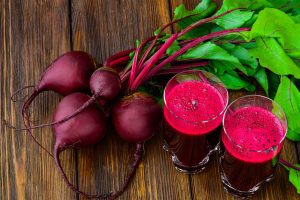 Blood pressure and exercise endurance in elderly patients with heart failure with a preserved ejection fraction (HFPEF) can be improved with a daily dose of beetroot juice.

Characteristics of HFPEF are shortness of breath and fatigue during normal levels of exertion – also known as exercise intolerance. This occurs due to a reduction in oxygen to active skeletal muscles. HFPEF commonly occurs in senior women and is a common form of heart failure, becoming an increasingly common cardiovascular disorder.

The researchers conducted a double-blinded, randomized safety study on 19 participants to determine what would improve exercise tolerance – a single dosage of juice or multiple days of juice.

In our bodies, inorganic nitrate changes into nitric oxide, which relaxes and dilates blood vessels. Other leafy vegetables, like lettuce and cabbage, also have high levels of the compound, which they take up from the soil through their roots.

The study, published in the journal Hypertension and funded by the British Heart Foundation, also found that a daily glass of beetroot juice can lower blood pressure in people whose high blood pressure was not controlled by drug treatment.

This was the very first study to reveal the long-lasting reduction in blood pressure because of dietary nitrate supplementation in a group of patients with high blood pressure.

In fact, the patients in the active supplement group also experienced an improvement in their blood vessel dilation capacity – roughly 20 percent – and saw their artery stiffness reduced by around 10 percent. And studies show that such changes are connected to a reduced risk of heart disease.

So what does all of this mean? Well, these findings suggest that there’s a role for dietary nitrate – or heart-healthy food – in the treatment of patients with high blood pressure. It’s something patients can easily work into their daily lives and reap the benefits.


High blood pressure by the numbers

According to the U.S. Centers for Disease Control and Prevention (CDC), high blood pressure is either the primary cause of or at least contributes to 1,000 American deaths every single day.

New hypertension guidelines could save your life

Last year, researchers selected by the National Heart, Lung and Blood Institute released new and simplified guidelines for the treatment of high blood pressure. The complete implementation of these guidelines could prevent 56,000 cardiovascular disease events, mostly heart attacks and strokes, and 13,000 deaths every year. That’s without increasing overall healthcare costs, according to research by Columbia University Medical Center and published in the online edition of the New England Journal of Medicine.

Thanks to this most recent study of high blood pressure and heart healthy food, there’s little doubt that the treatment of hypertension can improve even more.

One tip: If you’re looking to increase your daily nitrate intake, be sure not to boil heart-healthy foods like vegetables, because the nitrate dissolves in water. Instead, try steaming, roasting, or drinking something like beet juice. It’ll have the same positive effect.