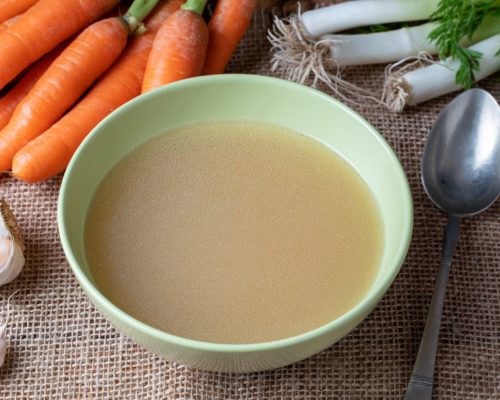 Although everyone seems to be talking about bone broth, it isn’t new or revolutionary. It’s just finally gaining traction for all of its amazing health benefits.

Bone broth can easily be made at home by simply boiling animal bones – such as chicken – and connective tissue. Information has come to light that highlights the many health benefits of bone broth, especially when it comes to the heart.

Bone broth contains many essential nutrients such as amino acids and collagen.

Researchers wanted to take a closer look at bone broth and its possible benefits to the heart. They carefully looked at how the proteins released in cooked down bones change and interact with the human body. Specifically, they looked at how Spanish dry-cured ham bones could be a source of heart-benefiting peptides.

After simulating the cooking of the bones and human digestion, they focused on angiotensin 1-converting enzyme (ACE-1), endothelin-converting enzyme, dipeptidyl peptidase-4, and platelet-activating factor acetylhydrolase enzymes, which play a role in heart disease. There are medications that currently clock these enzymes, but researchers were interested to see if there was a food source to block them.

The authors concluded, “These results suggest that dry-cured ham bones [used in] stews and broths could have a positive impact on cardiovascular health and a possible reduction of high blood pressure for consumers.”

It’s important to note that the saturation of peptides through simulation differs from actual living organisms. The study will need to be recreated to confirm findings.

In the meantime, there is no harm done by consuming bone broth – especially during these colder months – to not only keep you warm, but give your immune system a bit of a boost when cold and flu germs are rampant.