Home » Health News » Bad Indigestion? How to Get a Handle on Diarrhea 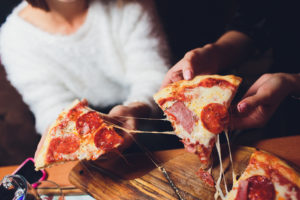 Walking around town the other night, I was hit with a sudden urge to urinate. My friend and I searched out a restaurant and I headed down the hall towards the restroom. A moment later, my friend pushed me aside, ran in, and locked the door.

He emerged a few minutes later saying he had experienced an unforeseen bout of indigestion. Diarrhea had knocked down the door and waiting was not an option.

I’m sure you’ve been in a similar situation.

About an hour prior, he’d downed a couple of slices of pizza and the cheesy, fatty, gluten-filled food had made its way through him. It’s hard to say what the trigger was, but it hit, and relief was imminent.

Most bouts of diarrhea come from foods. In some cases, it might be a side effect from medicine, but generally speaking, it comes from what you eat.

Which can be strange considering you might have been eating the same stuff your entire life. Unfortunately, like many other parts of you, your stomach and digestive system can change over time.

Whereas you may have been able to handle an entire pizza, a pound of fried chicken wings, or spicy curries, now they send you to the toilet in the express lane. Even in small amounts.

Certain foods are diarrhea trigger and may be behind your regular indigestion. They include:

Of course, you don’t want to flat-out avoid everything you enjoy. Instead, you’ll want to start paying careful attention and journaling which foods you eat cause diarrhea.

In some cases, like pizza, it could be the gluten, fat (grease), or dairy that causes you to need the bathroom. Experiment with each of those items individually so you know what you can handle.