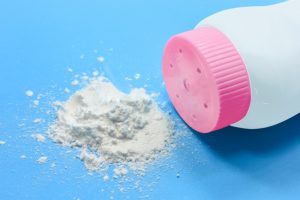 A jury in St. Louis has come to a consensus against Johnson & Johnson on the issue of baby powder being associated with ovarian cancer. The multimillion-dollar lawsuit against the company was started by a woman who suggested she used the product for decades and it contributed to her ovarian cancer diagnosis. There are currently 1,700 state and federal lawsuits alleging that the company failed to warn the public about the risk of ovarian cancer associated with the use of talc powder.

Spokesperson for the company Carol Goodrich expressed, “We deeply sympathize with the women and families impacted by ovarian cancer.”

Two New Jersey cases have been ruled out because the judge felt the evidence was inadequate to support the claim that talc powder could lead to ovarian cancer.
Experts on the topic suggest that if there is a risk of ovarian cancer from using baby powder, it is quite small as the data so far is inconclusive. Although some studies have shown a slightly higher risk, others did not, so it is still too early to make a definite statement whether baby powder can increase the risk of ovarian cancer.

Cancer geneticist Dr. Steven Narod explained, “The only real risk factor for ovarian cancer that everybody agrees on is genetics — whether they have a family history or whether they have a BRCA1 mutation. If there’s a risk with talcum powder, it’s very small and hard to measure.”

Researchers suggest that if you’re using baby powder and are worried about the risk of ovarian cancer, simply stop using it.

Ovarian cancer may be prevented by exercise