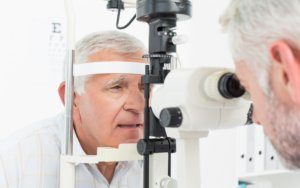 For more than ten in every 100 people suffering from severe visual disability in the United States, the problem is a direct result of autoimmune uveitis. While cortisone therapy helps bring down the inflammation, it’s not advisable for long-term use, as it is linked to many harsh side effects.

Until recently, it was unclear as to why the immune system attacks the eye, but a study by researchers at the National Eye Institute (NEI), a part of NIH, might provide a clue. The study, done on mice, suggests that intestinal bacteria may provide a kind of training ground for immune cells that attack the eye.

The eye is unique in that a protective blood-ocular barrier keeps it separate from the rest of the body. This barrier minimizes the flow of substances and blood-borne cells to and from the eye.

The way immune cells (T cells) normally operate is they target proteins in bacteria, viruses and cells, and when they make contact with them the T cells become activated.

For autoimmune uveitis to happen the T cells must penetrate through this blood-ocular barrier because the proteins usually targeted in uveitis are isolated in the eye; they don’t exist elsewhere in the body. Uveitis researchers have been trying to figure out how the T cells get activated and what helps them cross the blood-ocular barrier.

In the study, the researchers analyzed mice which were genetically engineered to have a high level of retina-reactive T cells in their bodies, so as to develop autoimmune uveitis. The team searched the bodies of the mice for activated T cells before the onset of the disease. They were amazed to find high levels of activated T cells in the intestines of the mice and not in the lymph nodes (the glands that normally swell during infections) as expected. They also found that the T cells in the intestines produced a protein that increases tissue damage in autoimmune uveitis.

To complete the loop, the researchers activated retina-specific T cells by exposing T cells to a mix of bacterial proteins that were extracted from the intestines of the mice.  When these activated T cells were introduced into normal mice, they got symptoms of uveitis.

The strong evidence from the study indicates there is a link between the gut microbiota – bacteria, fungi and viruses – and the development of autoimmune disorders.

Given that our intestines are teeming with different types of bacteria, if some can mimic a retinal protein, there is every reason to believe others can mimic different self-proteins in the body and promote other autoimmune diseases. If this is true, the harmless bacteria in the gut may not be so harmless after all.

Having said that, the team is not suggesting a bacteria-free state or eliminating bacteria from our bodies. But, if scientists could one day identify which bacteria are involved in specific autoimmune diseases, it would open up avenues for prevention and treatment.