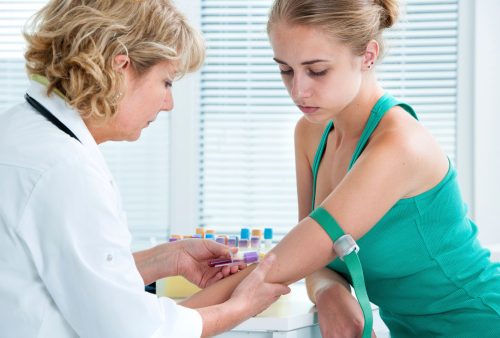 Researchers have found a marker in blood that could reveal the risk of developing rheumatoid arthritis (RA) up to 16 years prior to the start of symptoms. A research team from the Kennedy Institute of Rheumatology at Oxford University found that the blood test looks for antibodies that could accurately predict who will develop RA.

Inflammation can cause certain proteins to alter in a process called citrullination. Altered proteins can lead to an immune response, which creates antibodies against itself and causes rheumatoid arthritis. The blood test then spots antibodies for citrullinated proteins in order to diagnose RA. A general test known as CPP is currently used to detect RA.

Lead researcher, Dr. Anja Schwenzer, said, “We knew that tenascin-C is found at high levels in the joints of people with RA. We decided to see if it could be citrullinated and, if so, whether it was a target for the autoantibodies that attack the body in RA. That might also indicate whether it could be used in tests to indicate the disease.”

“When we looked at results from more than 2000 patients we found that testing for antibodies that target citrullinated tenascin-C (cTNC) could diagnose RA in around 50% of cases, including some cases not identified by CCP. It also has a very low rate of false positives – it is 98 percent accurate at ruling out RA,” Dr. Schwenzer added.
Professor Kim Midwood, Ph.D., said, “What is particularly exciting is that when we looked at samples taken from people before their arthritis began, we could see these antibodies to cTNC up to 16 years before the disease occurred – on average the antibodies could be found seven years before the disease appeared. This discovery therefore gives us an additional test that can be used to increase the accuracy of the CCP assay and that can predict RA, enabling us to monitor people and spot the disease early. This early detection is key because early treatment is more effective.”

Research director, Dr. Stephen Simpson, said, “When it comes to rheumatoid arthritis, early diagnosis is key with research showing that there is often a narrow ‘window of opportunity’ following the onset of symptoms for effective diagnosis and control of disease through treatment. Furthermore, current tests for rheumatoid arthritis are limited in their ability to diagnose disease in different patients. This latest research provides the basis of tests that could improve diagnosis and, importantly, detect disease at a very early stage, with the promise even that people at risk of developing rheumatoid arthritis can be followed before the disease begins. This could have great potential to help patients with rheumatoid arthritis get the right treatment early to keep this painful and debilitating condition under control.”