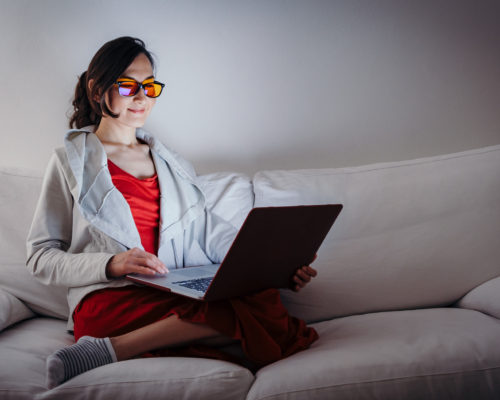 You’ve likely heard that blue light exposure can make it harder to sleep at night. But new data is showing they could negatively impact colon health too.

Blue light emitted by most white LEDs (light-emitting diode) come through the screens of smartphones, tablets, and computer screens. Increasingly, they are coming out of city streetlights. And all that exposure might have a severe effect on your colon.

A new study from Spain is showing that the more a person is exposed to blue light, the more likely they are to develop genetic mutations in the colon. It might seem like a surprising association, but similar links exist between blue lights, breast, and prostate health.

Researchers tracked data on about 2,000 adults living in the Spanish cities of Barcelona and Madrid. Of the group, 660 had serious colon illness and the rest were randomly selected from the general population.

They found that people with the highest blue light exposure had a 60% higher risk of developing genetic mutations in their colon compared to those with less.

Results were published in the journal Epidemiology.

Although the study did not prove that blue light causes colon problems, the findings are striking. Some believe the risk is related to hormonal changes caused by nighttime blue light exposure, namely impaired melatonin production.

Much more work is required to establish a solid relationship between blue lights and colon health, but it is worthwhile to do your best to curb exposure when possible. This would involve limiting screen time in the evening or using “darkness” mode when screens are required.

If your street is lined with blue light or other signage, try your best to block it out. Set up your bedroom at the back of the house (or where incoming light is limited) and purchase blackout curtains or shutters.

There is an increasing amount of research showing the dangers of blue light exposure on health. These risks are likely associated with their effect on sleep and circadian rhythm, so optimizing these factors by limiting blue light exposure is recommended.