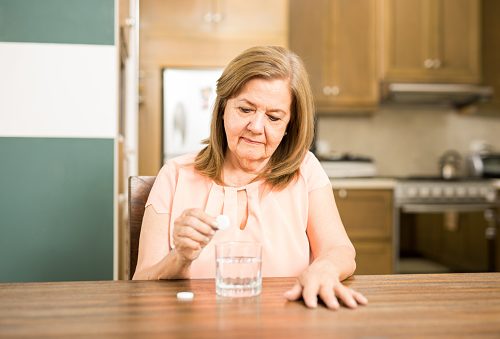 Doctors previously believed that certain popular heartburn medications could increase the risk of dementia and Alzheimer’s disease, but the latest findings suggest quite the opposite.

The study focused on proton pump inhibitors (PPIs), which were previously believed to increase the risk of Alzheimer’s disease in people over the age of 75.

The researchers explored data that was collected between 2005 and 2015, which included nearly 10,500 Americans who were 50 years or older. These individuals had normal brain function or mild thinking difficulties.

Eight percent of the participants frequently used PPIs, 18 percent were occasional users, and those who used PPIs generally were older than non-users.

The researchers found that PPI users had a lower risk of thinking decline.

The researchers wrote, “The results of this study do not confirm recent reports that the use of PPIs is linked to greater risk of dementia and Alzheimer’s disease.”

On the other hand, PPI users are more likely to also take anticholinergic medicines, which have been linked to thinking difficulties. Anticholinergic medicines work to treat incontinence, depression, and sleep problems.
PPI users were also more likely to suffer from heart disease, depression, diabetes, high blood pressure, stroke, and a mini-stroke.

The findings were published in the Journal of the American Geriatrics Society.

What are proton pump inhibitors (PPIs)?

PPIs work to reduce the amount of acid that is produced in the body. It does this by blocking an enzyme in the wall of the stomach that is responsible for producing acid. Although acid is necessary for the digestive process, some individuals produce too much of it.

Just like any medication, PPIs may cause side effects including a headache, diarrhea, constipation, abdominal pain, flatulence, fever, vomiting, nausea, and rashes. Speak to your doctor if side effects become severe or if other symptoms show up.