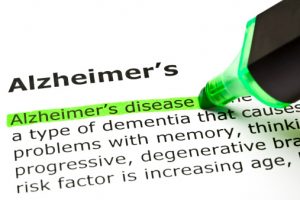 Alzheimer’s disease affects over five million Americans aged 65 and older and has doubled its death rate since 2002, according to a new report published by the Alzheimer’s Association. The neurodegenerative disease now claims double the number of lives that it did just 15 years ago, a statistic that the director of the Alzheimer’s Association Keith Fargo finds disconcerting. Fargo reacted to the numbers, calling them “alarming,” and went on to explain: “Now, a lot of people will think it’s because we’re living longer, and there is some truth to that. But there’s also an assumption that we should just expect to get Alzheimer’s disease as we get older. And that’s not true. Most people do not get Alzheimer’s, even if they live into their 80s or 90s. It’s not normal. It’s not something that we should accept. We’ve definitely got to do something about it.”

Approximately ten percent of the United States’ senior population—or five million older adults—are affected by Alzheimer’s, and these numbers are on the rise. By 2050, researchers project that the number of affected seniors will almost triple, reaching 14 million. In 2017 alone, it is expected that almost 500,000 Americans over the age of 65 will develop the memory-stealing disease, while reports have shown that 200,000 individuals under the age of 65 are also affected by the disease, meaning it is not exclusively an issue for the elderly.

Alzheimer’s is now considered the fifth most common cause of death among seniors, cementing its reputation as a potentially lethal disease. It is also the sixth leading cause of death among Americans of all ages and is the only disease among the top ten most prevalent causes of death that does not have any effective prevention, treatment, or strategies for slowing its progression.
While it takes a toll on the patient themselves, Alzheimer’s can also affect the health of caregivers. Studies have shown that over one-third of Alzheimer’s caregivers have reported worsening health since beginning to look after a loved one with the disease, and these caregivers are at an increased risk of suffering from depression and anxiety.

The report also provided information on the current direction of Alzheimer’s research, explaining that the focus is on observing neurological signs linked to the disease—such as changes in brain size and spinal fluid—in order to identify potential biomarkers. The discovery of biomarkers could, in turn, lead to earlier detection techniques and may one day open the door to preventative treatments.