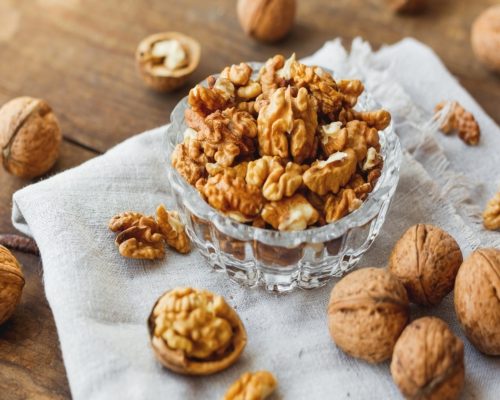 Alzheimer’s disease progression may be delayed or slowed with walnut-enriched diet. The researchers observed significant improvements in learning skills and memory, a reduction in anxiety, and improvement in motor development in mice who were fed an antioxidant-rich diet which included walnuts.

The researchers suggest that the antioxidant levels in walnuts may contribute to protecting the mice brains from degeneration typically seen in Alzheimer’s disease. Oxidative stress is commonly seen in this type of dementia, and antioxidants work to combat oxidative stress.

Lead researcher Abha Chauhan explained, “These findings are very promising and help lay the groundwork for future human studies on walnuts and Alzheimer’s disease — a disease for which there is no known cure.”

The mice received walnut supplements equivalent to one ounce and 1.5 ounces a day.

The walnut extract was found to have positive effects against oxidative stress, a contributor to amyloid plaques.

Alzheimer’s disease cases are expected to reach 16 million mark by the year 2050 – that is triple the amount of cases currently. There is a strong need to uncover effective ways of reducing the risk of Alzheimer’s disease or even slowing down its progression.

Previous studies have shown that walnuts can benefit the body in several other ways as well, including heart protection.


Other superfoods that may help fight Alzheimer’s disease

Food can go a long way in improving our health and bodily functions. There are many different foods that have been shown to offer protective properties to the brain which may help reduce the risk of Alzheimer’s disease and degeneration of the brain.

Other nutrition tips for fighting Alzheimer’s disease involve eating well-balanced meals, making sure that you are eating the superfoods in balance, limiting foods high in cholesterol and saturated fats like red meat and processed foods, cutting down on your refined sugar intake, and limiting foods that are high in sodium.

As Alzheimer’s disease progresses, a loss of appetite is a common symptom. When this occurs, the patient may be unable or unwilling to eat. This can be problematic because then they face a higher risk of malnourishment, and their brain starves for essential nutrients. In this case, doctors may recommend liquid supplementation or having smaller meals frequently throughout the day.

Proper nutrition is important to sustain health, including brain health, and eating the right foods can help protect your brain from damage.