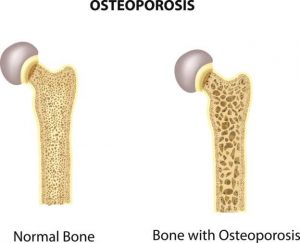 In Alzheimer’s disease, low bone density may indicate brain degeneration. Reduced bone mineral density is associated with a higher risk of bone fracture, which can lead to a poorer quality of life and increased mortality among Alzheimer’s disease patients.

Dr. Christine Dengler-Crish explained, “Measurement of bone density, which is routinely performed in the clinic, could serve as a useful biomarker for assessing AD [Alzheimer’s disease] risk in our aging population. The findings of this study motivate us to explore the serotonin system as a potential new therapeutic target for this devastating disease.”

Dr. Dengler-Crish concluded, “I am thrilled to be able to assist the publication of researchers’ innovative work, here and across the world, that is desperately needed to combat these currently incurable chronic diseases. Now more than ever, there is hope that we soon will be able to slow, stop, or reverse the progression of these destructive neurodegenerative conditions.”

A common drug used to treat Alzheimer’s has shown potential in mice models to prevent bone fractures. The findings were discovered by researchers at Saitama Medical University in Japan. Researchers are hopeful that the Alzheimer’s drug has the potential to treat osteoporosis and periodontitis.

With aging population, Alzheimer’s disease is the most common form of dementia, and the number of cases continues to climb. Loss of bone density is not only found in aging people, but is also part of the early stages of Alzheimer’s disease, which can increase a person’s risk of bone fractures.

Lead author Dr. Tsuyoshi Sato said, “We think that donepezil can improve cognitive function and increase bone mass, making it a very useful drug for patients with dementia and osteoporosis. From the viewpoint of medical economics, this dual purpose could reduce the cost of treating these diseases.”

Two kinds of cell control bone mass and density: osteoblasts make bone and osteoclasts absorb it. Acetylcholine – a molecule – causes osteoblasts to die, while acetylcholinesterase – an enzyme – breaks down the molecule (the effects of this are largely unknown).

A common Alzheimer’s drug stops the acetylcholinesterase process from occurring, thus increasing acetylcholine in the brain. Previous research on the Alzheimer’s drug revealed that those who took it had a reduced risk of hip fractures – the results, though, were determinant on the level of dosage.

Studies have shown that acetylcholinesterase activity increases with age, speeding up bone loss in seniors. Dr. Sato added, “Our findings are very promising and suggest that there is a role for donepezil in increasing bone mass in elderly patients with inflammation and dementia. There is still work to be done and we look forward to observing the effect of this drug in patients.”