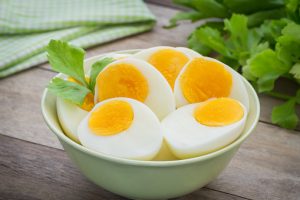 High intake of cholesterol and consumption of eggs are not associated with an increased risk of Alzheimer’s disease or dementia – even in those carrying the APOE4 gene variant (which affects cholesterol metabolism and increases the risk of memory disorders).

Previous research has linked high cholesterol to a higher risk of cardiovascular disorders and memory problems. Although there aren’t dietary cholesterol limits for general population any longer, those with APOE4 gene variant are recommended to limit their dietary cholesterol as it has greater effect on serum cholesterol than in people without the gene variant. A hereditary variant, APOE4 is a risk factor for cardiovascular disease and memory disorders. It is quite common in Finland, where the present study took place, with one-third of the population being carriers.

For the study, the researchers explored the dietary habits of 2,497 men with no baseline diagnosis of memory disorders. Of the participants, 32.5 percent were carriers of APOE4 gene variant. During the 22-year follow-up, 337 men were diagnosed with a memory disorder.
The researchers found that a high intake of dietary cholesterol was not associated with a higher risk of dementia or Alzheimer’s disease – regardless of whether the participant was an APOE4 carrier. Consumption of eggs – a food known to be high in cholesterol – did not increase the risk of dementia or Alzheimer’s disease either. On the other hand, egg intake was associated with better results on cognitive tests.

Although the study concluded that dietary cholesterol does not increase the risk of Alzheimer’s disease or dementia, the average cholesterol consumption in the highest control group was 520 mg (and one egg daily) so the findings cannot be generalized beyond these levels.