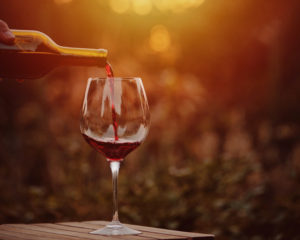 Did you need another excuse to drink red wine? Probably not. But I’ll give you one, anyways.

You may have heard or read somewhere that red wine might actually be healthy. There are a number of studies saying that it can help with circulation, vein health, and heart health in older adults. These benefits are largely due to the drink’s antioxidant content.

And a new study suggests it may have an even greater anti-aging effect than previously thought.

Researchers at University College London, in the United Kingdom, have found that antioxidants in red wine could replicate the health benefits of estrogen, one of your steroid hormones.

Produced naturally in both women and men, estrogen helps protect against metabolic diseases, cognitive decline, and more. Although it is most well-known as a prominent female sex hormone, it can also protect against age-related conditions like:

Using in-vitro studies, they found that red wine could activate estrogen receptors called sirtuins, which play a variety of roles associated with healthy aging. Active sirtuins are have protective effects for a number of conditions.

However, they found that only a small dose was needed. When too much red wine was introduced, sirtuins signaling was slashed. So, one glass of wine, for example, could be useful. A second or third glass, however, may negate benefits.

Red wine, of course, is not the only source of antioxidants. They are also found in blueberries, raspberries, peanuts, pistachios, grape skin, cocoa, and even dark chocolate.

Including these foods or sticking to one five-ounce glass of red wine per day could offer protective benefits for your liver health, heart, metabolism, and brain.

Of course, this long list of potential benefits is all contextual. The results of this new study, published in Scientific Reports, were found in-vitro. Further, overall diet and lifestyle is likely to play a role in risk for these multifactorial health conditions.

That said, red wine has been repeatedly found to offer health benefits in small doses. So, during your nightly routine, pour a glass of wine to help you unwind. It could be doing a lot more good than you think.