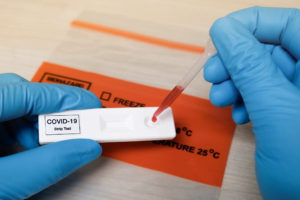 It’s highly unlikely that you’ve had the same cold or flu twice. When you suffer through a seasonal illness, your body adapts and develops antibodies. It gets stronger during the fight and comes back differently. You’ve become immune to that particular strain.

That theory has been the hope for people who’ve recovered from COVID-19. The theory goes that if you’ve had it, you might not be able to get it again. Thinking you’re safe, you could return to life as usual without much worry of spreading or contracting the disease.

But a new study is saying “not so fast.”

The idea of “immunity passports” may be wishful thinking. A new study is showing coronavirus antibodies may not last longer than a few months in humans who’ve beaten the virus.

Researchers in the Wanzhou district of China put the antibody theory to the test. They studied 37 people who became infected and showed symptoms, and another 37 who were infected but were asymptomatic (showed no symptoms).

Eight weeks after recovery, antibodies dropped to undetectable levels in 40% of asymptomatic people and 13% in those who showed symptoms.

The results were published in Nature Medicine.

So, if you’ve had COVID-19, it doesn’t necessarily mean the virus won’t get you again. This could put you and others in danger. If you recovered more than eight weeks ago, you might be misguided in your belief that you are immune from COVID-19.

More research will emerge in the coming weeks and months about immunity. Still, for the time being, it is recommended to cancel any travel plans and be sure to practice risk-lowering behavior like social distancing, wearing a mask, and frequent hand washing.