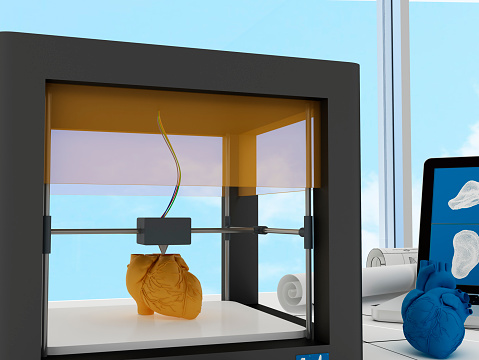 Having something appear at the snap of our fingers is a fantasy we all have, or even simply pressing a button and making an item appear before us—think of all the uses. But alas, this is mere science fiction relegated to an episode of Star Trek. However, it is this fantasy that has lead the newer generation to ceaselessly pursue such amazing technology to make it into reality, and the fruits of their labor are just beginning to show. 3D printing is a cool new thing, and it’s now possible to even print out cartilage tissue using stem cells.

3D printing is a relatively new technology and is making waves in the medical industry. The concept of printing a document is a relatively common practice. But imagine printing out a real, physical, 3D object. This is exactly what 3D printers achieve, albeit the technology still has a way to go. A team of researchers at Sahlgrenska Academy has managed to generate cartilage tissue using a 3D bioprinter, which was specifically modified to handle human cells. The use of biological cells in such a machine is quite an achievement, according to the researchers, as printing using stem cells often impacts their survival.

The team used cells harvested from patients who underwent knee surgery and then manipulated those cells in a laboratory. The stem cells were then expanded and encapsulated in a composition of nanofibrillated cellulose—the material used for making structures in this 3D bio-printer. Once the desired structure was printed with the cells, it was treated with growth factors, leading it to successfully form into cartilage tissue. The researchers remark that it took years of hard work to accomplish this result.
“We investigated various methods and combined different growth factors. Each individual stem cell is encased in nanocellulose, which allows it to survive the process of being printed into a 3D structure. We also harvested mediums from other cells that contain the signals that stem cells use to communicate with each other so called conditioned medium. In layman’s terms, our theory is that we managed to trick the cells into thinking that they aren’t alone, therefore the cells multiplied before we differentiated them,” says Stina Simonsson, associate professor of cell biology, who lead the research team.

The researchers go on to say that the cartilage produced is extremely similar to human cartilage, with experienced surgeons seeing no difference compared to the real thing. This doesn’t come as a surprise, as the cells in both the bio-printed cartilage and the cartilage found in joints are exactly the same.

While this is a big step forward in the ability to help those with degenerative cartilage conditions such as osteoarthritis, the research team feels better materials need to be used before we decide to use this new technology in human patients.

In dysphagia patients and elderly, swallowing made easy through 3D-printed food

Osteoarthritis and joint pain may be reduced with new 3D-printed cartilage: Study