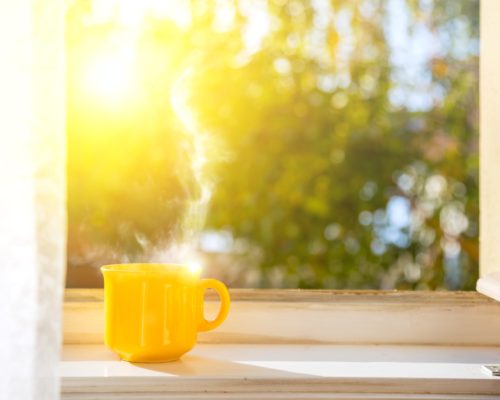 If you enjoy your cup of coffee out in the sun each day, you could be doing your body a lot of good. Two new studies are showing that coffee and sunlight are big-time contributors to gut health.

A “healthy gut” is determined by the bacterial populations (or flora, microbiota) that reside in the gut and colon. A diverse population where healthy strains outnumber unhealthy strains is associated with myriad benefits including better digestion, lower risk for irritable bowel disease, lower inflammation, better mood, and much more.

When you hear about gut health, your head likely goes to nutrition. Pre- and pro-biotic rich foods are usually the topic when talking gut health. But scientists are just starting to understand the various workings of the microbiota—your bacterial population—and new work is showing how simple habits going beyond what you eat can have a significant impact.

One study from researchers at the University of British Columbia showed that UVB ray exposure leads to a healthier microbiota in women with vitamin D deficiency. It only took about a week before sizeable benefits were observed and bacterial diversity increased to those with adequate vitamin D levels.

This might provide some insight into why people with low levels of vitamin D are more likely to experience IBD and other conditions associated with an unhealthy microbiome. The sun rays appeared to stimulate the shift, indicating that spending some time outdoors can improve bacterial populations and potentially unlock a host of benefits.

Another study from researchers at the Baylor College of Medicine found that coffee drinkers had significantly healthier microbiomes than those who only drank it in small amounts. Coffee consumption is associated with healthy arteries, lower levels of inflammation, glucose metabolism, and neuroprotective benefits. It may have something to do with its impact on gut diversity.

After controlling for dietary factors, researchers learned that those consuming more than 82.9 mg of caffeine per day (from coffee) not only had a healthier and more diverse population of gut bacteria, but harmful bacteria was less prevalent. To assess coffee’s influence, participants underwent a screening colonoscopy and endoscopy to assess bacteria in the colon. They also reported a food frequency questionnaire to identify coffee intake. Because not all coffee is created equal, you’d likely have to drink one or two cups to get 89.2 mg of caffeine.

So, is it that simple? Get outside and drink coffee for a healthy gut? Not exactly. Although these two small studies suggest a benefit to these practices, there are a number of factors that influence gut health. But hey, they could help boost your gut health and lead to some major health benefits.