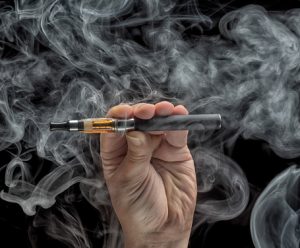 The metal and glass contraption that is growing in popularity among smokers is becoming a case of ‘out of the fire and into the frying pan’. While smoking these hi-tech gizmos does protect one from the ill effects of certain carcinogens associated with cigarette smoking, it does not protect against the nicotine (in most cases).

New research conducted by a team of scientists at the Albert Einstein College of Medicine and Montefiore Medical Center in New York, suggests that the sensitivity of the cough reflex is reduced by just a single puff of an electronic-cigarette (e-cigarette), which exposes the smoker to as much nicotine as one would get from a traditional cigarette.

The aim of the study was to determine the physiological and health effects of a single exposure to e-cigarette vapor on cough reflex sensitivity.

For the study, the researchers selected 30 adults who were lifelong nonsmokers with no history of bronchial asthma or any respiratory diseases. To elicit a safe cough reflex response, the researchers used capsaicin – a pungent extract from red peppers.

As a first step in the study, the 30 participants were exposed to the capsaicin to determine their baseline cough reflex. The amount of capsaicin used was enough to elicit a maximum of five coughs.

Then each participant was made to inhale 30 puffs of an e-cigarette, which contained nicotine in distilled water. There was a 30 second gap between each puff. Fifteen minutes and then 24 hours after the inhalation of the nicotine vapor, the participants were again exposed to capsaicin.

The researchers noted that in the 15-minute data collected there was a significant dip in the cough reflex sensitivity when compared to the baseline data. In other words, they coughed more than five times when exposed to the capsaicin.

The 24 hour data showed that the cough reflex sensitivity returned to baseline levels.

Based on their findings, the researchers were able to conclude that a single session of e-cigarette inhalation, with an equal nicotine exposure to that of one regular cigarette, prompts clinically noteworthy inhibition of cough reflex sensitivity. The authors of the study attribute this to the nicotine content in the vapor.

Clearly the shift from traditional cigarettes to this newfangled device, while safer, is still not a very healthy option.