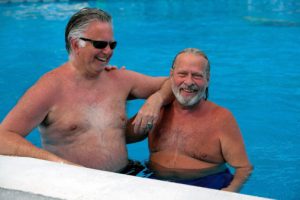 A recent study suggests that being taller or fatter than average puts men at risk for developing a more aggressive type of prostate cancer. Furthermore, these men are at a higher risk of death because of more aggressive prostate tumors.

Prostate cancer is the most common form of cancer that affects men, but with advances in research and prevention, survival rates have increased.

The researchers reviewed data from the European Prospective Investigation into Cancer and Nutrition (EPIC), which involved 141,896 men from eight European countries. There were 7,024 diagnosed cases of prostate cancer, and of those, 726 were aggressive tumors, 1,388 were diagnosed at an advanced stage, and 934 resulted in death.

Height and obesity were linked to a higher risk of being diagnosed with an aggressive prostate tumor and a higher risk of death from prostate cancer. With every 10 centimeters (3.9 inches) of height, the risk of high-grade tumor and death increased 21 percent and 17 percent respectively. With every 10 centimeters increase in waist circumference, the risk of a high-grade tumor and death increased 13 and 18 percent respectively.
The link between height, weight, and prostate cancer aggressiveness is still not understood, but the researchers suggest that their findings can springboard future research into uncovering this underlying link.

In regard to obesity, the researchers speculate that factors contributing to more aggressive cancer include an increase in hormones, which is often seen in obese individuals. On the other hand, being obese can make it difficult to properly diagnose prostate cancer early on, so when it is detected, it is often in advanced stages.

Although you can’t control your height, the best thing you can do to lower your risk of aggressive prostate tumors is maintain a healthy weight. If prostate cancer runs in your family, ensure that you are being tested early on.

Prostate cancer: To treat or not to treat