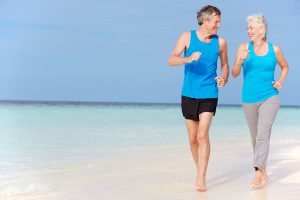 We all have those moments of memory fog when we can’t remember where we put our keys, forget a birthday of a loved one, or simply have no recollection of the name of the person we’re speaking to. These things happen from time to time, but can get more frequent the older you get.

Dementia and Alzheimer’s disease are a growing problem in the U.S. As the population continues to get older, the rates of these brain disorders are expected to increase substantially.

You may have heard of some tricks of the trade for maintaining memory, like learning a new skill or completing crossword puzzles, but a new study suggests another activity to boost brain health – which means a sharper memory for you.

Exercise and regular running offer numerous health benefits such as helping lose weight and naturally enhancing the mood. Well, running has now been found to be a brain enhancer as well, and it can help improve mental ability, too.

Researchers from the University of Cambridge found that regular running stimulates the brain to grow new gray matter, which plays a large role in maintaining mental ability. The researchers found that a few days of running led to the growth of hundreds of thousands new brain cells, thus improving memory recall.

The new brain cells appeared in the areas linked to the formation and recollection of memories. The findings suggest that jogging can help slow down deterioration of the brain and maintain mental ability even in old age.

Senior author Timothy Bussey said, “We know exercise can be good for healthy brain function, but this work provides us with a mechanism for the effect.” The new findings help support previous evidence confirming the positive impact exercise has on the brain.

How or why exercise creates more gray matter in the brain is still unclear. One of the possible explanations may have to do with an increased blood flow to the brain and a greater release of hormones.

The findings reveal a simple and easy solution for improving memory – jog, run, or simply move!

Want to improve memory? Take a whiff of this…