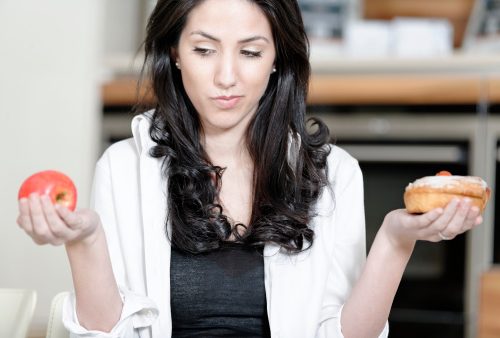 A new study has found in an effort to improve their diet people will over consume foods labeled “healthy.” The findings suggest that people will have larger portions, eat more and feel less full when they eat foods portrayed as healthy. Study author Jacob Suher said, “It’s quite ironic. The more we put out foods that are labeled healthy, we could be abetting the obesity epidemic rather than combatting it.”

Dietician Joy Dubost added, “When people say mind over matter, it really does seem to be a big factor. What your perception is of the food you eat can be very different from how your body is responding to it. Clearly, we need to start addressing both the conscious and the subconscious in our messages about healthy eating.”
The study occurred in three phases. The first part consisted of 50 college students who looked at pictures of healthy and unhealthy foods along with words associated with the image such as filling or not filling. The results indicated that participants felt unhealthy foods were more filling.

In the last phase of research, 70 college students were presented popcorn presented as healthy, unhealthy or nourishing. Those who consumed the nourishing popcorn ate less than those who ate the healthy popcorn but slightly more than the popcorn labeled unhealthy.

Reasoning for people’s perception of healthy foods may come from extreme examples when provided the word healthy or unhealthy ranging from salad to pizza for example which could influence eating habits.

Suher added, “People are more likely to consume unhealthy foods to fullness, because they’re either served in larger portion sizes or are seen as tastier.”

It’s important to note that overeating healthy foods can still contribute to unnecessary calories and even weight gain.

Further research should aim on older population groups like older adults to see if the results are the same across the board.

The findings were published in Journal of the Association for Consumer Research.