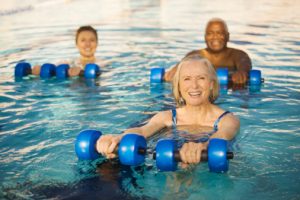 Researchers from the University of Michigan have found that everyday non-exercise physical activity is more beneficial for those with Parkinson’s disease than intermittent strenuous exercise.

Individuals with Parkinson’s disease often become sedentary as the disease impairs their motor skills and balance. Patients may develop a fear of standing as their symptoms worsen and the fear of falling becomes greater. The research team aimed to uncover if patients who engaged in exercise, like swimming and aerobics, would improve their motor skills in comparison to those who remained sedentary.

Principal investigator, Nicolaas Bohnen, said, “What we found was it’s not so much the exercise, but the routine activities from daily living that were protecting motor skills. Sitting is bad for anybody, but it’s even worse for Parkinson’s patients.”

Researchers looked into the relationship between the length of both non-exercise physical activity and the severity of motor skills for 48 patients with Parkinson’s disease over the course of four week. With PET brain imaging, researchers measured dopamine levels and used questionnaires to determine the activity level of each patient. They revealed that non-exercise physical activity was successful in improving the motor skills of the patients.

Loss of dopamine is noted as a key brain-change in people with Parkinson’s disease. Non-exercise physical activity protected motor skills in patients with varying dopamine levels.

Co-author Jonathon Snider added, “This may have a big impact for Parkinson’s patients. Not only worsening Parkinsonism, but also increasingly sedentary behavior may explain more severe motor symptoms in advanced Parkinson’s disease.”

Bohnen concluded, “I tell my patients to stand up, sit less, and move more.”

The findings are available online at Parkinsonism and Related Disorders.