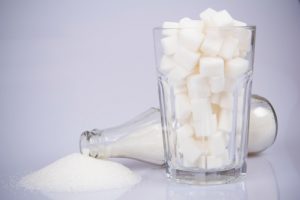 Gradually curbing sugar levels in beverages could be an effective means in combating obesity according to new findings. Researchers calculated what would occur if sugar was reduced in common sugary beverages by 40 percent in the U.K. over the course of five years without replacing them with artificial sweeteners.

They estimated that reducing sugar in beverages could lead to the prevention of one million obesity cases, 500,000 overweight cases, and nearly 300,000 diabetes cases over two decades.

Graham MacGregor and colleagues wrote, “The appreciation of sweetness can adapt to gradual changes in sugar intake, and it is unlikely that the proposed strategy will influence the consumers’ choice provided the gradual reduction is done over five years. These findings provide strong support for the implementation of the proposed strategy.”
The greatest impact would be seen amongst teens, young adults, and poorer families.

Tim Lobstein, director of policy at the World Obesity Federation in London, wrote in an accompanying editorial, “Policies can be developed that have the potential to quickly change behavior and begin to reduce the prevalence of obesity and related diseases.”

If the reduction of sugar is accompanied by other policies – for example a soda tax – the number of obesity, overweight and diabetes cases could further be reduced.