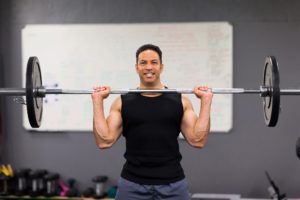 Maintaining muscle mass in middle age could be an effective way of warding off heart disease. According to new research published in the journal Epidemiology & Community Health, the amount of lean muscle mass that a healthy person has in middle age is linked to their future risk of cardiovascular health, at least in men.

Previous studies have shown that muscle mass is associated with cardiovascular events, but these have focused primarily on the health outcomes of patients with existing heart disease. This is why researchers set out to find if muscle mass in middle age might also make a difference in people without heart disease.

For the study, researchers monitored 2,020 people and analyzed the number of new cases of cardiovascular disease occurring over 10 years. Participants had an average age of 45, and none had heart disease at the start of the study. They all provided lifestyle information including their daily level of physical activity and how closely they followed a Mediterranean diet.

Circulating blood fat levels were measured along with indicators of inflammation. Blood pressure and weight (BMI) were also monitored as they are all potential risk factors for heart disease. Muscle mass was calculated using previously published data, which was adjusted for height and weight.

The participants with the highest muscle volume tended to be younger, male, smokers, and those who were physically active and who mostly consumed a Mediterranean-style diet. Researchers caution that the gender disparity may be partly due to higher muscle volume in men due to hormonal differences between the sexes in the aging process.

Muscle tissue volume starts to progressively decrease from the mid-30s onwards at a rate of around 3% every decade. It has been shown to play an active role in various metabolic processes, and its decline is associated with health issues such as disability and a heightened risk of death.

Researchers concluded the study, saying, “This is an observational study, and as such, can’t establish cause. Nevertheless, the results “point to the importance of [skeletal muscle mass] preservation in relation to [cardiovascular disease] risk.”

They suggest along with many health professionals that physical activity, including resistance training, can help to preserve lean muscle mass. A diet rich in protein may also help in the aging process and can keep muscle mass at a higher level, therefore cutting risk of cardiovascular events.